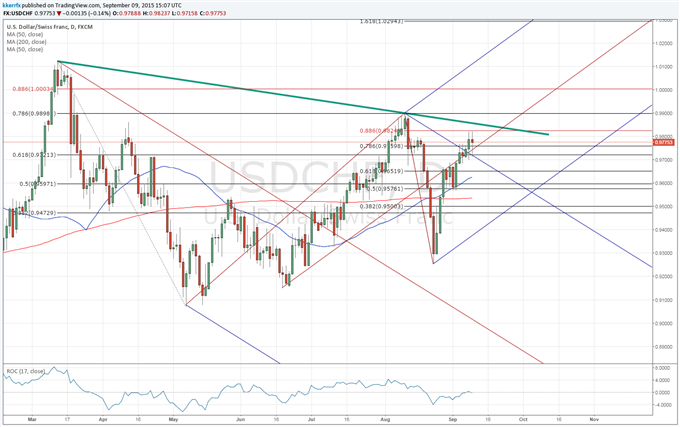 USD/CHF broke through several key levels of resistance yesterday before stalling out at the not widely watched 88.6% retracement of the August range near .9825. Of all the levels broken yesterday, the upper parallel (.9730) of an Andrews’s pitchfork drawn connecting the March/August highs and the May low is probably the most important as it is a clear early warning sign that the dollar is trying to break free from the range of the past few months (especially given the fact that the exchange rate failed to even get to the median line before turning higher).

What worries me in the near-term is the shape of the consolidation since March. Ideally I would like to see five legs develops before going higher and right now I can really only make out four. This risk in my view, is that we get another minor leg down before making any sort of meaningful upside push. It doesn’t have to happen of course, but it would make for better symmetry and also make me feel a lot better about the potential success of any breakout in price.

The various legs of the consolidation have had pretty decent symmetry as the May – August one stopped right at the 78.6% retracement of the March - May move down. The August decline played out in a similar fashion as it stopped just a few pips shy of the 78.6% retracement of the May – August leg higher, while the August – September run higher has so far stalled at the previously mentioned 88.6% retracement (square root of 78.6 which is the square root of 61.8). Assuming we are in for a final leg of the consolidation then the natural place to look for it to extend to would be around the 78.6 and 88.6% retracements of this latest advance, but I would caution against looking for such a deep retracement as final leg moves have a tendency to fall well of short prior ones.

Price is the final arbiter of course and if USD/CHF is starting higher without the idealized final leg down then the market will most definitely let us know. The 88.6% retracement of the August range at .9825 is obviously a level of interest, but above there I am really focused on the trendline connecting the March and August highs at .9850 and the 78.6% retracement of the March – May move down around .9900. Traction above these levels would be hard to ignore and signal the dollar has already started a more important move higher.