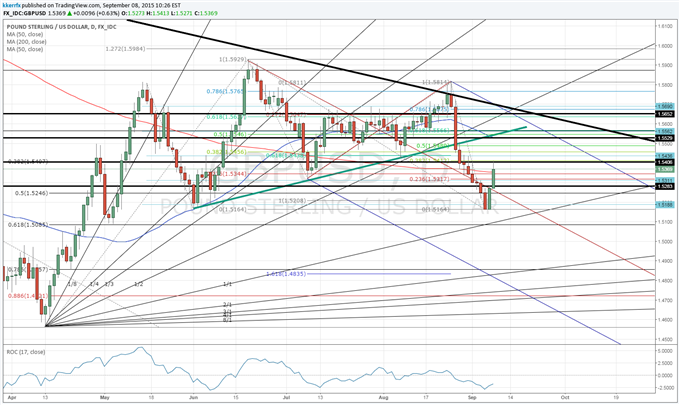 US traders have come back to their desks this morning after a three day weekend to find GBP/USD has retraced all of last week’s decline. Given where we closed on Friday (i.e. through various levels of support including the 50% retracement of March - June advance) the move is clearly perplexing to many. M&A flows have gotten the blame, but I chalk it up more to short-term cycles and the US bank holiday. There is an old saying in FX that goes “never buy a Friday high” (or sell a Friday low). This probably goes double for cable ahead of a three day weekend as if there is any “pain trade” to sniff out in thin conditions the interbank market will usually find it in sterling.

My GBP paranoia aside, the timing was right for a week long recovery from a short-term cyclical perspective. If that is indeed the case then it would argue that this recovery still has another 2-3 days left in it. The big question for me is really how far can it go? I’d like to give the recovery a little room as the bigger picture timing suggests that the broader downtrend in place since July of last year has begun to reassert itself as the high last month came right at the 50% retracement in time of the July 2014 – April 2015 decline. It also came around the 1x1 Gann angle line of last year’s high which has a natural timing element built into it that suggests something similar. It is also worth mentioning that the June high which failed at the 50% retracement in price (closing basis) occurred right around the 25% retracement in time of the decline from last year’s high so there is plenty of potential symmetry here that points lower in the medium-term.

The short-term is a different story as the immediate risk is that this recovery continues into the latter part of the week. The exchange rate failed this morning right at the 2nd square root relationship of the last week’s low and ideally I would like to see the pound stall out there. Should this level break, I would be open to the possibility of a more aggressive correction towards a confluence of Gann and Fibonacci levels between 1.5530 and 1.5580. Too much above there, however, and I would seriously question whether a broader downside resumption scenario is actually playing out. Weakness, on the other hand, under last week’s 1.5164 low would signal that the broader decline is resuming earlier than expected.