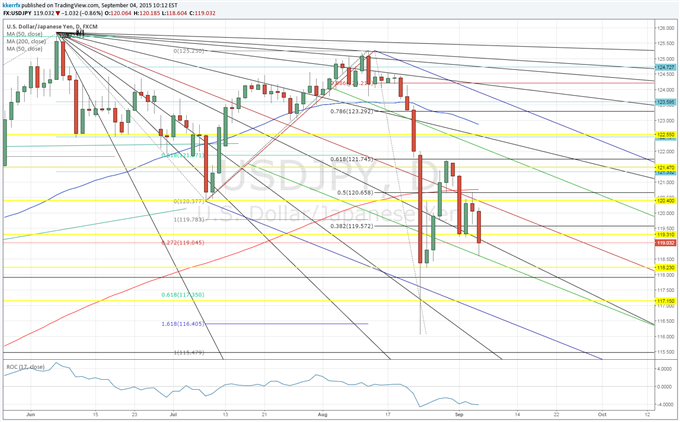 USD/JPY: Another Cycle Turn Coming Up or New Leg Down?

The reversal and downside re-test in USD/JPY I was looking for earlier in the week (read HERE) played out nicely as the exchange rate failed right in the Gann/Fibonacci resistance zone between 121.45 and 122.55 (4th and 5th square root relationships of August low & 61.8% retracement of the August range). While spot got nowhere near last week’s intraday low of 116.07, it did trade within about 20 pips of the low close earlier today. Whenever you get the extreme volatility like we had last week and such a big discrepancy between the closing price on the day of a low and the intraday low given price it is usually not a bad idea to pay very close attention to both.

I say this because for all intents and purposes I view the price action this week and today as a re-test of last week’s low. As I mentioned last week, the timing coming up over the next few days is pretty interesting as there is a nice convergence of a few unrelated cycles. So if USD/JPY is going to stage a more meaningful rebound and confirm the importance of last week’s low then the next couple of days is the time to do it. The US Labor Day holiday does throw a slight wrench into the timing period as it elongates an already long window by an extra day, but I would also say that I have noticed over the years that when these turn windows fall around a holiday it is usually supportive.

A move through the 120.50 area would begin to confirm the positive view, but traction over the 61.8% retracement of the August range around 121.75 is probably really needed to signal that a firm base is actually in place. I wouldn’t rule some final weakness even in a more bullish scenario, but a daily close under the August closing low around 118.40 would cast a large shadow on the recovery scenario after today. Continued weakness past the end of the turn window on Tuesday would signal that USD/JPY is about to undergo a much more important decline in the weeks ahead.

Price & Time covers key technical themes daily and can be delivered to your inbox each morning by joining the distribution list:Price & Time