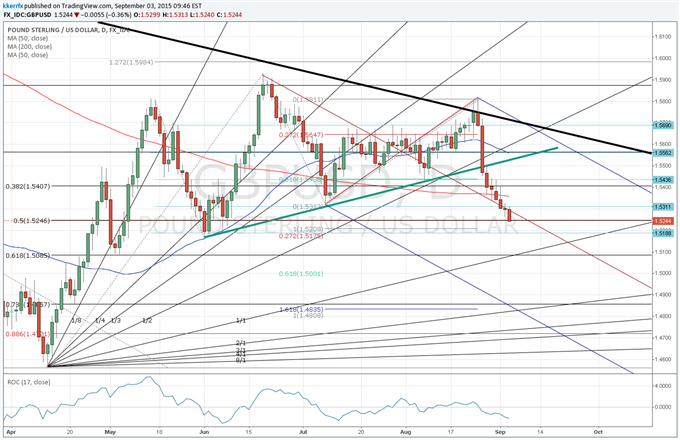 Price & Time: Primary Downtrend Trying To Reassert Itself In GBP/USD?

Cable triggered a multi-month head & shoulders pattern or something that closely resembles one on the move last week below 1.5490 (neckline). I especially liked the way the exchange rate reacted on the back test of this level on the 27th as the recovery stalled at the neckline almost to the pip - demonstrating a pretty clear change in behavior.

The fact the right shoulder of the pattern came around the 1x1 Gann angle line of the 2014 high is also potentially important. As I wrote back on August 18th (read HERE), the 1x1 or 45 degree line was considered the most important angle drawn by Gann on his charts as generally speaking he believed a market was in a downtrend when below it. He also believed that a 1x1 line drawn from an important high should provide major resistance for a market. Given the final part of this potential topping pattern came from an important 1x1 failure (while the whole pattern came from a failure at the 50% retracement of the last year’s high), one has to wonder if we are seeing the primary downtrend try to reassert itself here?

As a quick aside I should note that FXCM On-Balance Volume (not shown) has been skeptical of the recovery in GBP/USD for quite some time as the indicator was making new yearly lows throughout much of the consolidation last month.

Going forward the key zone to watch looks to be between 1.5175 and 1.5240 as this marks a confluence of the 50% retracement of the April – June advance, the measured move of the June –July decline and 127% extension of the July - August advance. A clear break under this zone would help confirm the notion that we are witnessing the beginning of a broader move lower and not just a broadening of the sideways to lower range of the past few months. Back through 1.5400 would relieve some of the immediate downside pressure, but only traction over 1.5530 would force a broader re-think.