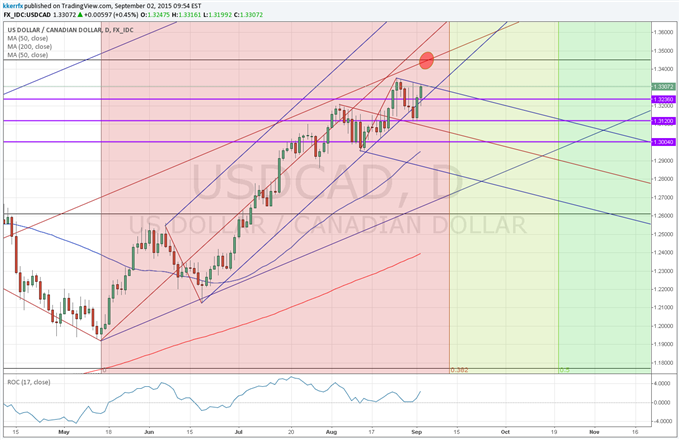 Automate your trading with Mirror Trader. Learn more about it HERE

I am a big believer in the notion that a convergence of long-term symmetry in a market can have a bit of a gravitational pull on price. There is also an element of timing as market geometry techniques like Gann angles and pitchfork lines naturally have a timing component built into them.

We seem to be having one of these potential “magnet like” situations developing in USD/CAD over the next week. A few things will be converging on the 1.3450 area during this time including the 61.8% retracement of the 2002 – 2007 decline (which is obviously static) and the median line from the last year’s July low. The pitchfork drawn from the July 2014 low has already proven useful as the recent June low came from right around the lower parallel. The median line has yet to be tested, but spot has come close several times over the past few weeks and there does seem to be a bit of a natural attraction there.

It is also interesting to note that next week falls on the 38% retracement of the time between last year’s July low and this year May low. Fibonacci timing counts from the last year’s July low have proven useful so far as several recent turns have been witnessed around ratio counts from the July 2014 – March 2015 trend cycle. Now does all this guarantee that we go up there and test it in the next few days? Of course not, but I do think the probability is a little higher. If we do, I will be very interested to see how we react as it is the reaction that should give us real insight into the direction of the next meaningful move in spot. A clear failure somewhere around 1.3450 and that probably opens the way for a significant counter-trend move. An easy break through this convergence and a move towards 1.3800 becomes a very likely path.

As far as downside levels go, I am watching 1.3120 and 1.3090. We bottomed around 1.3120 earlier in the week, but more importantly it is the 2nd square root relationship of the year’s high (Learn more about square root relationships HERE) and is a natural stopping point for short-term corrections. The 1.3090 level is the median line of a pitchfork drawn from the early August high. A clear break under this lower level would warn that a more pronounced correction is probably already underway.