Price & Time: Everybody Is An Equity Trader Now 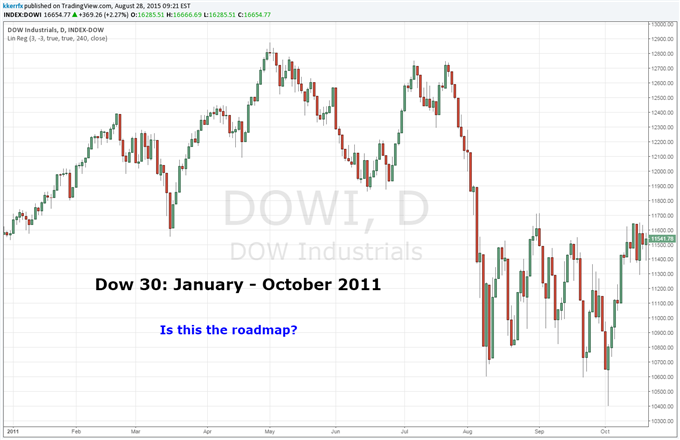 Traders tend to love analog charts. A potential roadmap to near-term price action is an elixir just too powerful for most to pass up (myself included). I don’t have any hard evidence, but I would be willing to bet the popularity of technical analogs spikes up anytime the PBS documentary of Paul Tudor Jones from the 1980’s gets illegally downloaded to YouTube.

Traders generally also tend to have short memories and focus primarily on the recent past. The volatility this past week in equities seems to have a lot of people making comparisons with the decline and rebound from last October. There has been more than a fair share of “V bottoms” over the past few years so I wouldn’t completely dismiss it. I just think it is a lower probability.

If you want to compare recent price action to anything for a potential guide I would say look at 2011. Just like this year, the Dow stalled out around February, made a high in May and then started to breakdown in August. Like this year, the topping process in 2011 saw breadth deteriorate and carve out a pretty clear head & shoulders pattern.

This all suggests to me that things could remain rather hairy for at least a few months with the potential for some wild swings in both directions. If a 2011 like market is indeed playing out then an initial downside re-test shouldn’t be too far off.

I would say a couple of things to be on the lookout for would be to see if the index just doesn’t stop moving up (kind of obvious). The 50% retracement of the decline from May comes in around 16,860, while the 61.8% is just above 17,200. An advance that easily runs through those technical retracements would, in my opinion, make a replay of last year’s ‘run for the roses’ more feasible.

The other thing to keep an eye out for is if we do roll over aggressively. A close below the August low (whatever it ends up being) would be a huge red flag that a much more aggressive decline is taking hold.