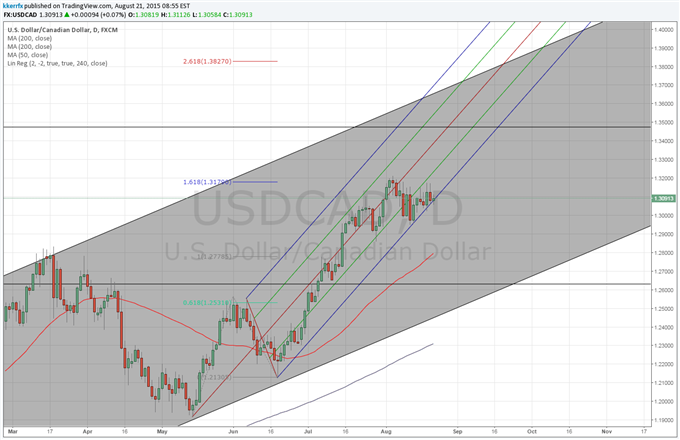 USD/CAD continues to chop around in a sideways to lower range below the 1.3212 multi-year high recorded earlier in the month. Following the breakout in July above the 2009 high the medium-to long-term technical outlook is clearly favorable with a move through Fibonacci resistance at 1.3170 and of course the high at 1.3212 needed to set off a run higher towards the 61.8% retracement of the 2002 – 2007 decline near 1.3500. The current correction from the high has been relatively tame thus far given some of the other moves in G10 FX. Of course a lot of this has to do with the relentless offer in crude, though with sentiment in the commodity falling to contrarian “red flag” levels of just 6% bulls yesterday the time may be approaching for at least a modest turn around in oil and CAD. The low end of a median line channel drawn from the May low has supported downside attempts thus far, but is getting tested again today. A daily close below this level (currently around 1.3080) would be an early warning sign that the correction is starting to gain some traction. However, a clear break of last week’s low near 1.2950 is probably needed to turn the near-term technical picture more convincingly negative.

Strategy: Sell USD/CAD on a break

Entry: More aggressive traders can look to sell funds on a close below 1.3080 while my conservative traders can wait for a move under 1.2950 before looking to sell on rallies.