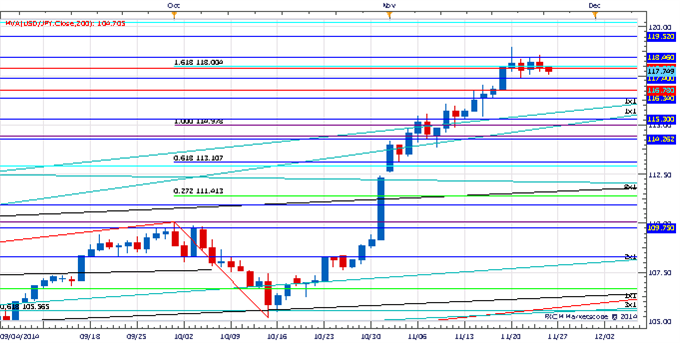 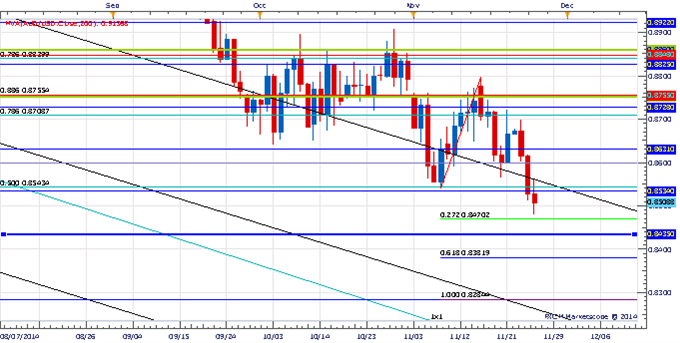 Focus Chart of the Day: FXCM US DOLLAR INDEX We are starting to have doubts about the Dollar again in the medium-term. December is historically one of the worse months for the Dollar Index from a seasonal perspective. This coupled with the fact that the FXCM US Dollar Index is hitting a major resistance cluster between 11,310 and 11,400 (78.6% retracement of 2009-2011 decline, 50% retracement of 2001-2011 decline and the 61.8% projection of the 2011-2013 advance) at the same time that long USD positioning is at all-time highs by some measures and sentiment towards other developed currencies is at or near decade long lows is certainly worrisome from a contrarian point of view. The talk going into end of year is that these trends should continue and the fact is they usually do, but most years the FX markets aren’t exhibiting these outlier extremes in positioning and sentiment. In our view, the end of the calendar year now becomes a double edged sword. Yes there are plenty of incentives to keep the party going, but it only takes one or two major players to decide to throw in the towel early and things can turn ugly fairly quickly with the markets leaning so much in the same direction. Our work with cycles suggests that December should be more volatile this year for the Greenback. Next week’s ECB meeting looks to be the clearest potential catalyst as disappointment from Draghi whether perceived or real could force some liquidations. We shall see. Happy Thanksgiving!