Price & Time:Time To Be Cautious on AUD/USD? 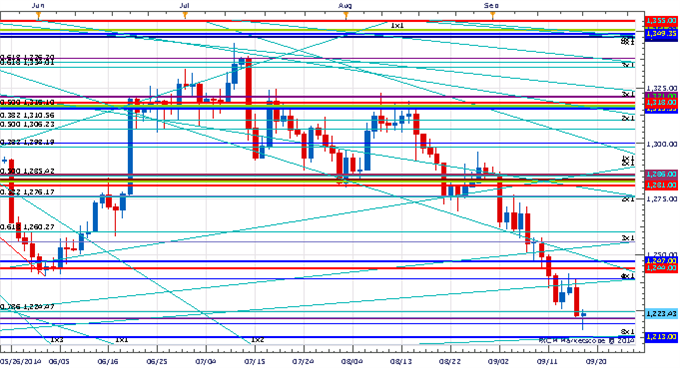 AUD/USD rebounded off the .8980 61.8% retracement of the year’s range earlier the week. The move higher proved short-lived, however, as the exchange rate fell sharply in the aftermath of the FOMC announcement to record its lowest level in six months today. This action is seemingly very bearish for the exchange rate, but we remain cautiously optimistic over the next few days as the cyclical “tea leaves” suggest that AUD/USD is susceptible to some kind of reversal around this time. We say this because over the next few days the 2011 high in the Aussie will measure 3.14 years at about the same time as the Autumnal Equinox. The 3.14 year interval is an important cyclical relationship that routinely pops up around market turns (the June peak in crude is a good recent example). The Autumnal Equinox is one of the most important times of the year in Gann theory and currency rates in particular have been historically susceptible to turns around this time of the year. We think this cyclical convergence increases the possibility of a turn over the next few days, but we really need to see price action confirm before looking to fade such a clear trend. Idealized turning points are seen at .8920, .8865 and .8835.