The DailyFX PLUS Trading Strategies have sold aggressively into the day’s British Pound breakdown. The key question is simple: is the start of a much larger sell-off?

Our high-volatility Breakout2 trading system has had a fair deal of success trading the British Pound in recent months—particularly against the Japanese Yen. Past performance is absolutely not indicative of future results, but the fact that Breakout trading has been successful in the GBP does give us reason to believe that the current trades have a fair chance at success.

The purely sentiment-based Momentum2 strategy can claim similar outperformance in British Pound pairs through recent trading, and said system has likewise sold into the GBPUSD and GBPJPY turn lower.

Below is a screenshot of the strategy dashboard available on DailyFX PLUS:

I’ll admit that this British Pound sell-off has caught me by surprise; I was previously long the GBP against both the US Dollar (long GBPUSD) and Euro (short EURGBP). And indeed our technical forecast for the GBPUSD called for continued strength above $1.5100.

But as I wrote earlier on Twitter, the aggressive build in retail long positions in the British Pound warns against buying this dip. It’s certainly possible that the trading crowd might indeed catch the falling knife on this sell-off, but the severity with which the pair has fallen in my opinion warns against it.

Crowds Buy Aggressively into British Pound Tumbles versus US Dollar 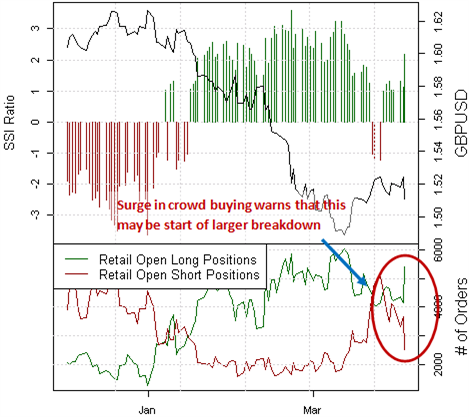 Yesterday I advocated trend trading across all GBP pairs on a critical week of FX economic event risk, and indeed the Momentum2 system put me into a GBPUSD-short position through earlier trading. As luck would have it I manually overrode said system and closed the position out at breakeven (could’ve, would’ve, should’ve…), but I haven’t quite given up hope yet.

If we see a GBPUSD daily close below $1.5100, I think this could be the resumption of year-to-date British Pound downtrend. If that does indeed happen, I would happily take fresh Momentum2 short positions in the GBPUSD and GBPJPY.

In the meantime, however, volatility seems a bit too low to chase the GBP lower here. Indeed, the “Volatility” figures on the GBPUSD and GBPJPY currently stand at 43% and 28%, respectively. I might hold off on further breakdown trades until we see a bounce in vols, but this could be the start of attractive trend trading across British pound pairs.

View Previous Articles on Automating DailyFX and DailyFX PLUS Strategies

Auto trade the trend reversal-trading Breakout2system via our previous article and webinar recording.

Trade with strong trends via our Momentum1 Trading System and view an archived webinar.

Why do most forex traders lose? How can we avoid common mistakes?