- Our bias remains higher in the rate, but strength over the 1.5195 3rd square root progression of the year-to-date low is needed to setup further gains

- The Gann level related to this year’s high at 1.5070 remains immediate support

-However, only aggressive weakness under the 50% retracement of the two-week range in the 1.5020 area would shift our bias to negative

- AUD/USD continued higher on Thursday and overcame a key Gann/Fibonacci convergence in the 1.0415 area to touch its highest level since early February

- Focus remains higher in the pair with immediate attention now on the 2x1 Gann line from the year-to-date closing high in the 1.0470 area

-Above this level needed to setup a further push towards more Gann resistance near 1.0500

- Short-term focused cyclical studies are negative over the next couple of days, but a more important turn window seen late next week

- The 1x1 Gann line from the year-to-date low in the 1.0340 area is now key support and only weakness under this level turns us negative on the Aussie

- EUR/SEK has started higher again following several days of consolidation above the 61.8% retracement of the two-week range

- We are still positive on the cross with immediate focus on a convergence of Gann & Andrews lines in the 8.3850 area

- However, strength over the 61.8% retracement of the February to March decline in the 8.4000 area is really needed to signal the start of a more significant advance

- The 8.3120 retracement remains key support and only weakness under this level shifts our bias to negative 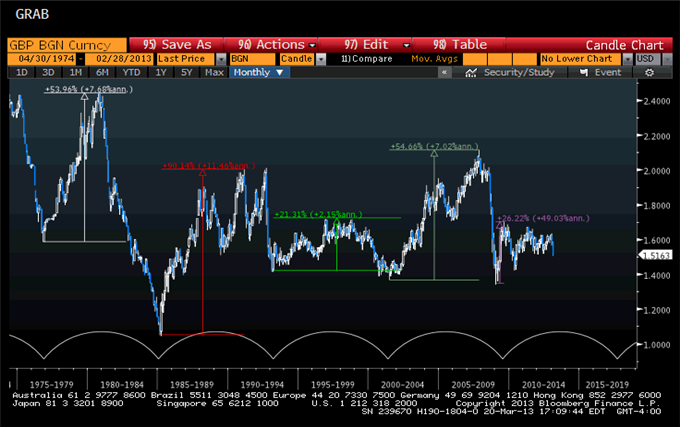 The longer-term low to low cycles in Cable are quite accurate. As the above chart shows, important lows in the exchange rate are seen on a pretty regular frequency of about 8 years. The 8 to 9 year cycle is one of our idealized frequencies as it fits well with Pi and other mathematical relationships. What makes the current cycle particularly interesting is that the most recent significant cycle low in January of 2009 (which was early) was proceeded by such a meager advance when compared to the 1970’s, 1980’s and the mid-2000’s. The lack of strength in this “up cycle” is not without precedent, however, as the low in the early 1990’s led to a similarly disappointing advance. The big question in our mind now is whether the high recorded in 2009 was the high of this cycle or whether we will see one more move higher before heading lower into 2017? Not so coincidentally, 2017 looks like an important time period for several other key exchange rates as well.