- Focus is higher, but important resistance lurks overhead with the critical 1x1 Gann line of the 2011 low now at 97.25

- The 95.60 5th square root progression from last month’s low is immediate support, but only weakness under the 1x8 Gann fan line at 94.95 shifts our bias lower

- Our bias is lower, but caution is strongly advised as we now probe a critical long-term Gann/Fibonacci cluster between 1.4815 and 1.4850

- A Gann Wheel level related to the January year-to-date high in the 1.4940 area is now immediate resistance

Strategy: Cable is near an absolutely critical level. With the cycles turning positive a counter-trend move should be expected. We want to buy a break of 1.4940 if it happens.

- EUR/GBP has moved higher over the past few days to re-test a critical retracement cluster between .8780 and .8800

- Our bias is higher in the exchange rate, but a close over .8800 is really needed to confirm the integrity of the latest push higher and setup a more meaningful advance

- Immediate support is seen at the 1st square root progression of the year-to-date high in the .8725 area

- However, a move under the 1x2 Gann line of the last month’s low near .8675 is really required to signal the start of a more important decline 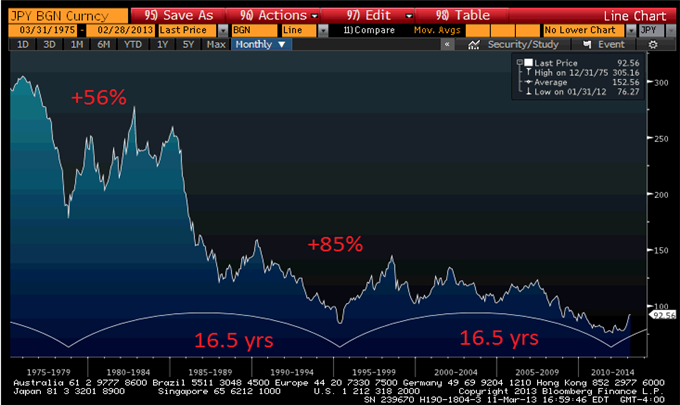 One of favorite longer-term cycle counts is between 16 and 18 years. This fits well with Pi and various other methodologies and routinely shows up throughout market history. One reason we are positive on USD/JPY in the longer-term is that it exemplifies this cycle quite well. The chart above shows that an important low was recorded in late 1978 and another one in the Spring of 1995 for a low to low cycle of just under 17 years. From this 1995 low to the next major significant low recorded in October of 2011 the duration was once again just under 17 years (16.5). The pair clearly responds well to this particular frequency and given these long-term cyclical lows have led to advances in the past of more than 3 years ranging from +56% to 85%; the move in USD/JPY looks far from finished in a broader cyclical sense.