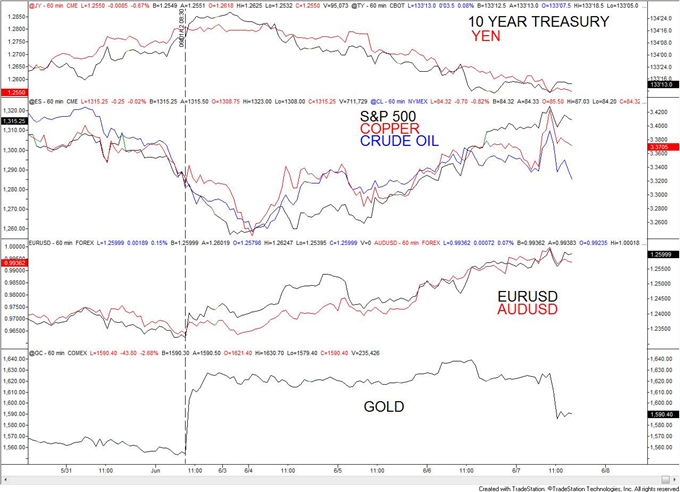 As focused on last week and early this week, a panic low was registered last Friday after NFP (in FX and gold). Copper and equities got the message on Monday and Crude followed finally bottomed on Tuesday. Interestingly, gold (one of the leaders at the recent low) was the first to roll over (see the Daily Technicals for more on gold and other markets’ specific patterns and levels) and equities are at resistance.

The S&P gap higher into resistance on heavy volume and subsequent reversal this morning was a thing of beauty. It’s good to be bearish at resistance but wave structure and market internals (NYSE statistics) demand that we respect potential for a rally similar to the one that we just endured later in June, albeit from lower levels.

Want to learn more about this stuff? Come to next week’s Bootcamp.

In the current environment of central bank printing, and specifically USD printing, markets ebb and flow with the expansion and contraction of USD denominated credit. That’s all. 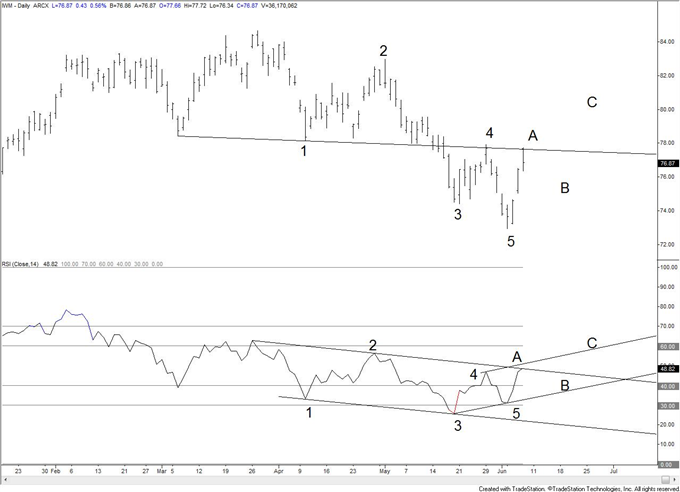 The Russell has come back to test the neckline of a well formed head and shoulders top. The decline from the March top was a 5 wave affair and we should therefore expect 3 waves higher from Monday’s low throughout June. The implications from the current juncture are for weakness but probably in a choppy manner (see wave 4). Expect this B wave correction to consume the rest of this week and probably next week. The labels on RSI correspond to waves in price of course but the characteristics of the indicator, such as the wave 3 extreme and divergence with wave 5, suggest that our interpretation is correct. 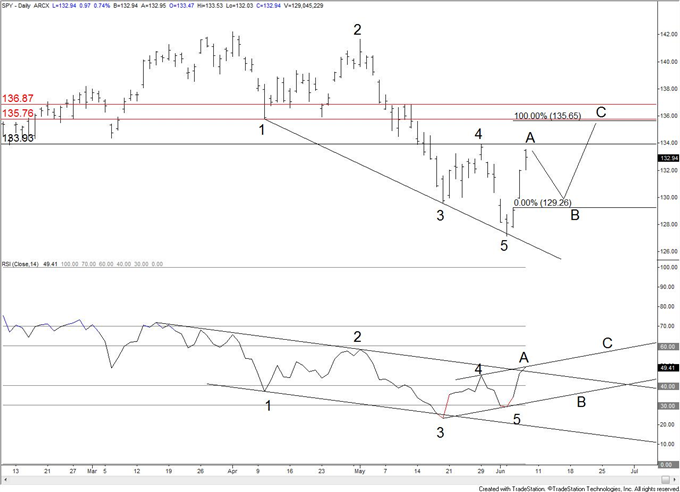 No need to go through the wave count explanation because it’s the same as the Russell but I wanted to provide these levels for risk management purposes. Ultimately, wave B might bottom near the gap left open from yesterday at 129.26. The 61.8% retracement of the rally from Monday’s low is at 129.58 and the 5/21 low is 129.55. It’s interesting to note that if today was the top of wave A (seems likely given the volume during the first hour of trading) and if wave B bottoms near the suggested level, then the rally from Monday’s low would compose 2 equal legs at the April low. I’ve shown the SPY ETF rather than the index because I wanted to highlight the gaps but corresponding index levels are noted.

How do you use this information to trade FX? You’ve already seen that everything is correlated so be bearish at resistance and bullish at support. We are at resistance now. There are many candidates to trade, including any combination of EUR, AUD / USD, JPY. AUDJPY (or NZDJPY) is the highest beta play (most risk). 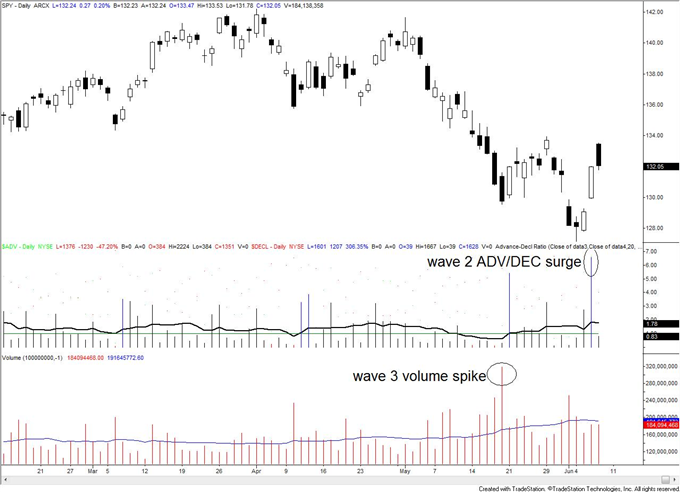 Price pattern (form) is the primary consideration but secondary considerations such as volume and breadth (NYSE advancing issues / declining issues) help in determining if the interpretation of form is correct. In this case, the volume spike on 5/18 is consistent with labeling that day as wave 3. The surge in breadth on 6/6 is consistent with the beginning of a larger (next degree) 2nd wave advance. 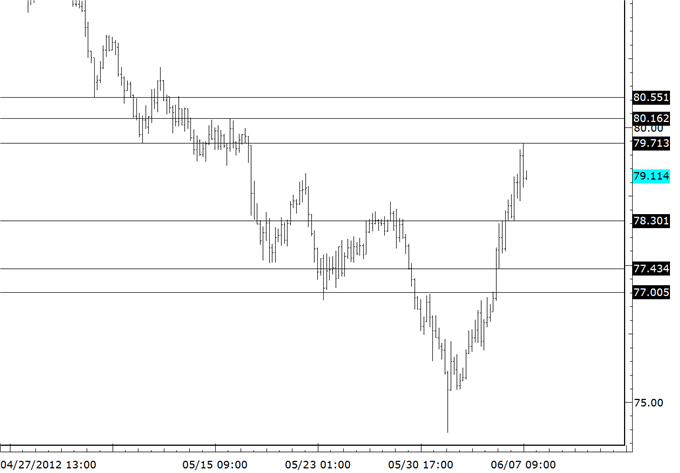 The interpretation of wave structure in risk at the current juncture is bearish but probably for just a partial retracement of the advance off of the low. The best expression of risk in the FX market is the AUDJPY, which reversed in the area of former congestion today. Resistance extends to 8055 in the event of another pop but downside risk outweighs upside risk in the short term. 7770-7830 serves as support over the next 1-2 days but 7700 is probably stronger support next week.