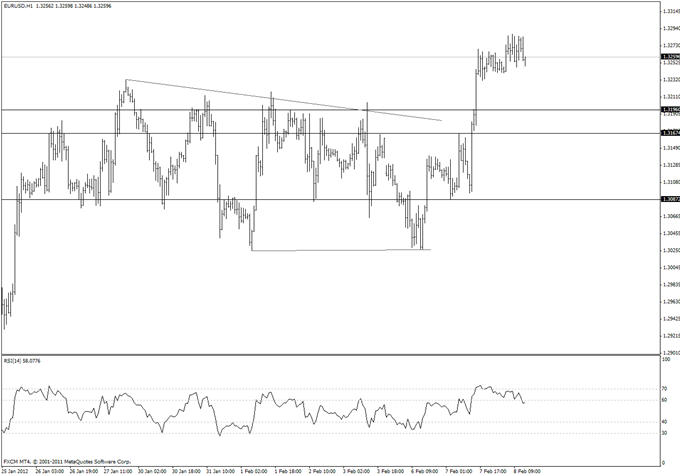 USDOLLAR (Ticker: USDOLLAR): Remains vulnerable to fresh lows towards the November low at 9665. A drop below 9665 exposes the next level of support, which isn’t until the trendline that extends off of the July and October lows near 9600.

EURUSD – 5 waves up out of the triangle are complete, which leaves the EURUSD vulnerable to at least a corrective decline. 13165-13200 is support and the larger trend is considered bullish towards the mid 13400s as long as price is above 13088 (2/7 low).

AUDUSD – This latest move to a new high is probably a thrust from a triangle. The implications are for a move back to at least 10760. More important support going forward is 10690.

NZDUSD – Has reached 8400. Daily RSI remains extreme (above 7800), which in recent years has preceded significant declines. Short term pattern wise, the latest rally may also be from a triangle so I am on the lookout for a move back to 8285.

USDJPY – “With the potential for intervention, bullish price action piques my interest. The rally from the 2/2 low is an impulse therefore longs are favored. Risk on longs is minimal at 7600 (under 2/1 low).”