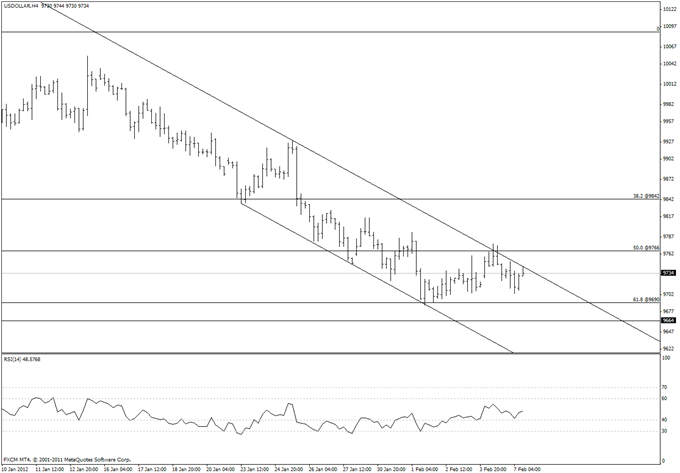 US Indices – Have done basically nothing since Friday’s NFP rally, when S&P futures traded at their highest level since the July high and Dow futures their highest level since December 2007! The divergence between the 2 futures contracts (Dow above 2011 high and S&P below) is consistent with a pending reversal conditions but a drop below 1303.75 (futures) and 1312.45 (index) is needed in order to trigger a reversal.

USDOLLAR (Ticker: USDOLLAR): Has reversed at channel resistance, which keeps price vulnerable to fresh lows towards the November low at 9665. A move through 9794 is needed in order to trigger a bullish bias.

EURUSD – Continues to trade within its first day of the month range (13218-13025). It is possible that a triangle is unfolding from the 1/27 high. An upside break would be expected since triangles are continuation patterns and the trend that preceded the triangle was up. An objective is the mid 13400s, which is defined by the 50% retracement of the decline from the October high at 13435 and early December resistance at 13460. 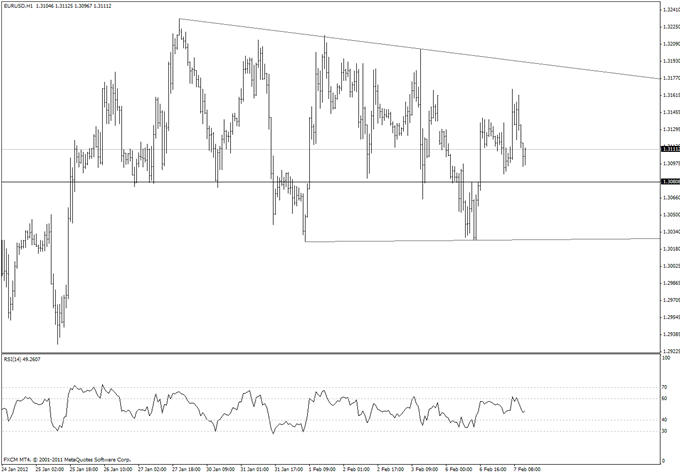 GBPUSD – Has spent the last 3 days trading within the first day of the month’s rang. The drop from the 2/1 high to the 2/6 low (145 pips) is the largest decline since the GBPUSD rally that began on 1/13. However, the structure of the decline is corrective and suggests that price will exceed 15882.

AUDUSD – Is strong on the heels of RBA last night. Te next upside level of interest is late July support at 10900 and a drop under 10568 is needed in order to trigger a bearish bias.

NZDUSD – A drop below 8285 is needed in order to confirm a short term topping pattern and shift focus to former resistance at 8249 and channel support at 8225 on Tuesday (increases 18 pips per day). Extreme momentum readings, such as daily RSI above 76 and price rallying for 7 consecutive weeks, favor a pullback into the mentioned levels.

USDJPY - With the potential for intervention, bullish price action piques my interest. The rally from the 2/2 low is an impulse therefore longs are favored on pullbacks into support between 7635/50. Risk on longs is minimal at 7600 (under 2/1 low). 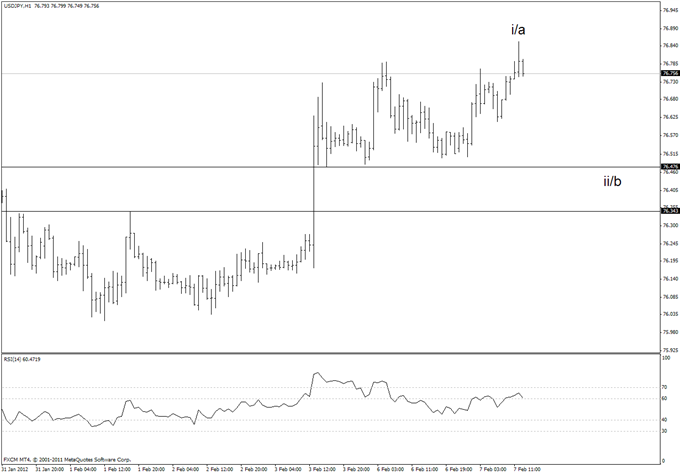 USDCHF – the rally from the low is in 3 waves to this point which is corrective and leaves price vulnerable to additional losses towards the 11/30 low at 9065.