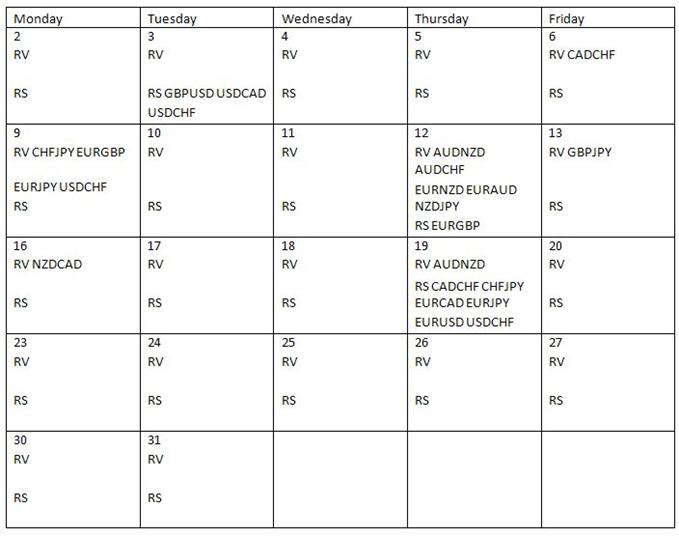 S&P – The futures have finally reached (and slightly exceeded intraday) the trendline that extends off of the May and July highs and the index will be just above its trendline on the open. Looking out a bit, the pattern from the 11/25 low may be a diagonal. If so, then a top should form before 1319.75 (so that wave 3 is less than 1 – common in diagonal…watch 1315 area). The wave 1 top at 1266 would be support. Strategically, refrain from trading from the short side until either an obvious blow off top on news or a drop under 1299.25. 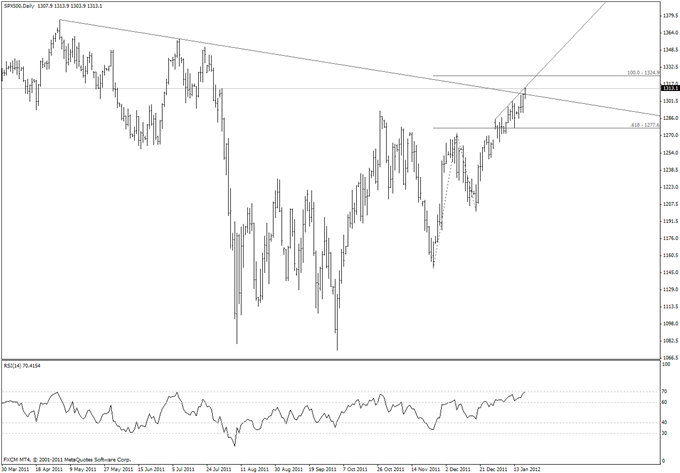 USDOLLAR (Ticker: USDOLLAR): The triangle remains the favored view. As focused on last night – “Expect support from a Fibo extension at 9915 as well as the triangle support line at about 9900.” Price pattern and the psychological environment (one and the same in my book) are ripe. The conditions that attend violent market turns have been met. 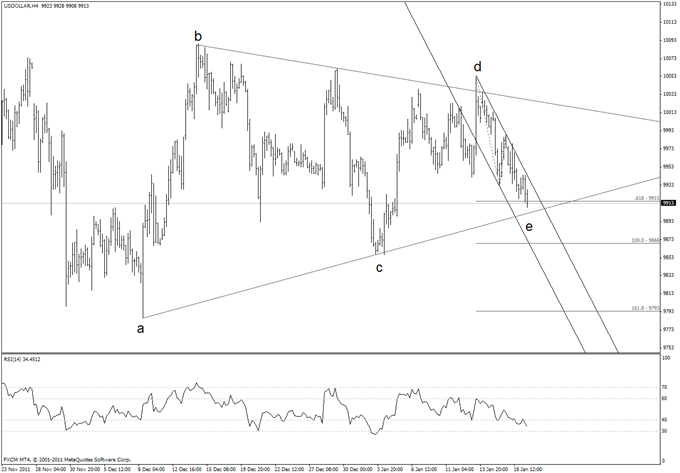 EURUSD – Has popped above the 20 day average and is nearing resistance from the 12/14 low at 12945. The mid 12900s are reinforced by channel resistance (originates from 11/25 low). Shorting the EURUSD is a frightening proposition given the record COT positioning (I admit that this fear is unfounded…a ‘record’ has been in place since September). The key level is the January high at 13076. At this level, shorts are warranted against that level (reward/risk has shifted to the downside).

AUDUSD – An AUDUSD top is either in place or will be with one more high. The AUDUSD failed to make a new high today, leaving an inside day at the 2 standard deviation band. This is a tried and true reversal strategy and I favor the downside with a tight stop (10450) as a new high could threaten the mentioned 10500 and 10577 levels.

NZDUSD – A picture perfect A-B-C advance may be complete in the NZDUSD. At minimum, price is at resistance and a dip is expected towards 7980. A drop below 7912 would confirm a reversal and shift focus towards 7770 and 7650. 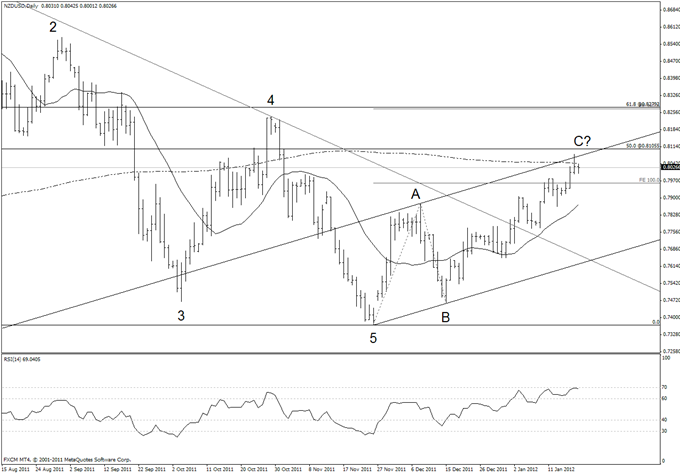 USDJPY – Is extremely choppy and best described as range bound between 7650 and 7750. Depending on the metric, volatility is at its lowest level since either 2007 (3 month implied) or 1997 (20 day ATR). In the last decade, this environment has preceded a sharp decline. However, COT is at a level consistent with recent interventions. The picture is far from clear and I suggest standing aside.

USDCAD – The tag of 10075 has also resulted in a touch of the -2nd standard deviation band. The last touch of the band was the day of the October low. Don’t dismiss the potential for a test of the 12/8 low at 10052 but the conditions seen at recent lows are present.

USDCHF – The USDCHF has continued to drop but I am abandoning the bearish bias as price remains above the early month low of 9304 (statistically significant) and bears must still contend with the trendline that extends off of the 11/30 and January lows.