Oil prices remain under significant pressure with front-month WTI futures falling some 20% this morning, following yesterday’s 25% decline. As such, this begs the question as to whether oil prices can go negative again. In short, it is more than likely that oil prices can fall to sub-zero levels again, given that the fundamental backdrop remains largely unchanged.

Storage Constraints: Among the main factors behind the precipitous fall in front-month WTI crude futures has been the lack of storage capacity to facilitate rising stockpiles. According to the EIA, in the week ending April 17th, Cushing stockpiles rose to 60mln barrels, up 20mln barrels in a month. As such, with working storage capacity at 76mln barrels, it would take another 3-4 weeks before oil capacity has been reached, thus raising the likelihood that oil prices can go negative. 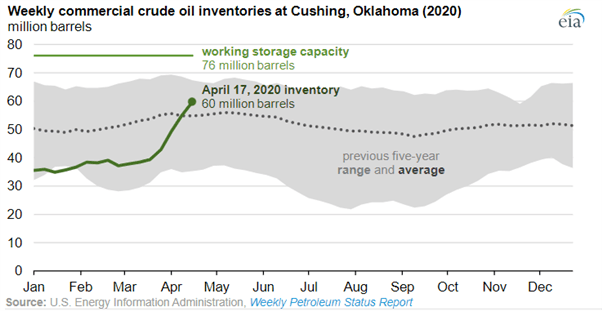 USO ETF: Yesterday, the world’s largest oil exposed ETF, USO, announced that it will start to liquidate their June positions (previously expected to roll portfolio from May 5-9th) amid the risk that front-month oil could go negative again. In turn, the USO will invest 30% of its portfolio in July futures, 15% in August, September, October and December contracts, while also investing 10% in June 2021 contract. In turn, this has also seen the S&Ps GSCI index announce an unscheduled roll out of their exposure to June WTI crude futures.

Commodity Currencies Impact: That said, while oil prices have plunged yet again, the broader market has been largely unfazed, given that the rest of the curve has seen relatively more muted declines. As such, commodity currencies such as the Canadian Dollar has been somewhat unresponsive to front-month oil prices with the chart below showing an increased disconnect between front-month oil prices and the impact on CAD. Consequently, we look to Brent crude futures as well as looking further down the oil curve to prompt a reaction in the Canadian Dollar. 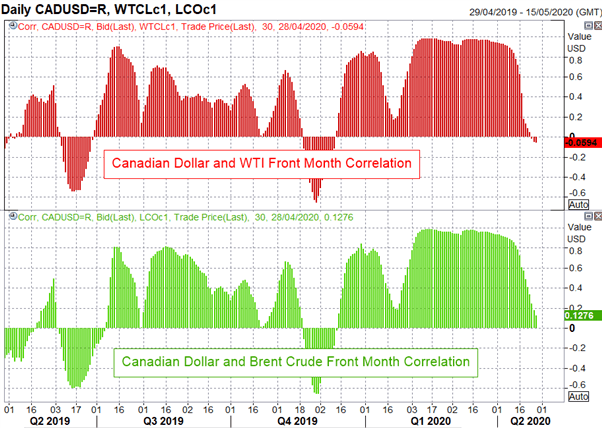 USD/MXN Takes Off to All Time High, Will US Dollar Stop its Rally vs Mexican Peso?
Advertisement