Which Currencies May be Most Affected by Gold Prices?

- The US Dollar and Australian Dollar may prove the most sensitive

- See the charts and analysis below for further details

Gold prices have tumbled and yet the FX impact has been limited as correlations weaken. This effect might be temporary, however; here’s what we’re watching.

Correlation between the Dollar Index and the Price of Gold

The correlation between the price of gold and the US Dollar Index fell and lingered around a low of -0.7 through May as gold acted as its traditional hedge against US Dollar volatility. The unexpected sharp drop in gold price recently disrupted the steady negative correlation, pushing it near -0.3. Gold prices may nonetheless settle into their familiar relationship with the US Dollar as the US Federal Reserve’s interest rate liftoff looms and the turbulence in the global markets subsides.

Gold has traditionally served as a hedge against US Dollar weakness and high inflation. If the Dollar strengthens and inflation drops on interest rate hikes, the price of gold by extension may trade in the opposite direction and regain its negative link to the US currency.

Correlation between the Australian Dollar and the Price of Gold 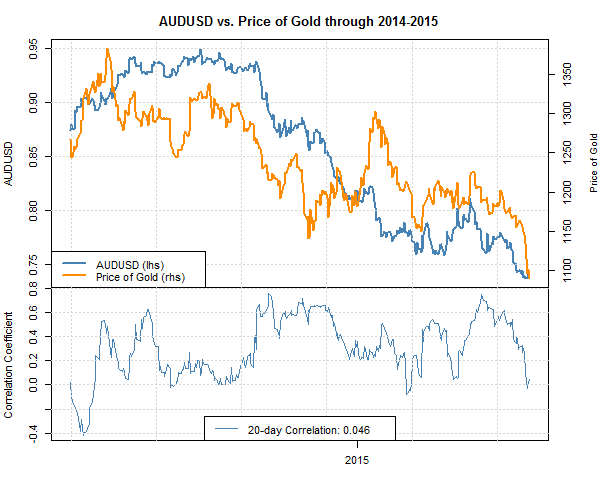 The strong positive correlation between the Australian dollar and the price of gold had been slowly diminishing since late May. The recent slide in gold price accelerated the process, driving the correlation to a near-zero level. Yet Australia remains an important exporter of gold as the precious metal accounts for 5 percent of total merchandise trade.

Perhaps in the near-term we may see the price of gold at a low correlation to the Australian Dollar as the US Dollar itself grows less-correlated. Yet it stands to reason we may see the AUD regain its link through the medium term—particularly as gold prices respond to planned interest rate hikes from the US Federal Reserve.

Correlation between the British Pound and the Price of Gold 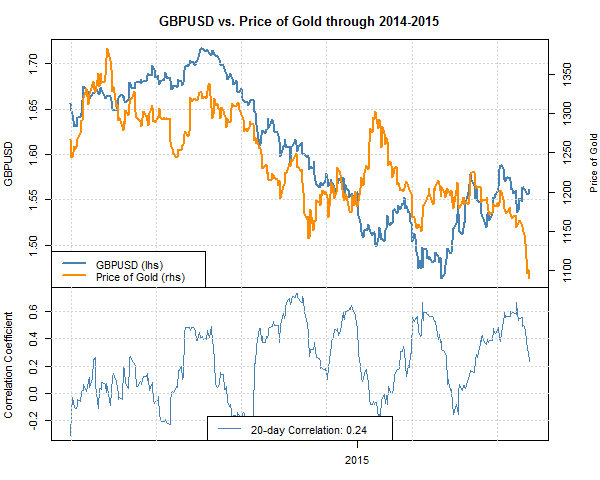 The correlation between the British Pound and the price of gold continues to fluctuate in a broad range this year, rising to 0.6 but at points going to a neutral 0.0. Much of this is linked to the US Dollar’s weakened correlation to the precious metal, but it is also worth noting that the British Pound is likely to move on likely interest rate moves from the Bank of England. UK inflation is still quite below the central bank’s official target, but BoE governor Mark Carney spoke recently that the MPC is ready to raise the benchmark rate as early as the turn of the year.

The British Pound may further detach from the price of gold as the strength of the Sterling will depend on the relative timing of interest rate liftoff by the BoE and US Federal Reserve. 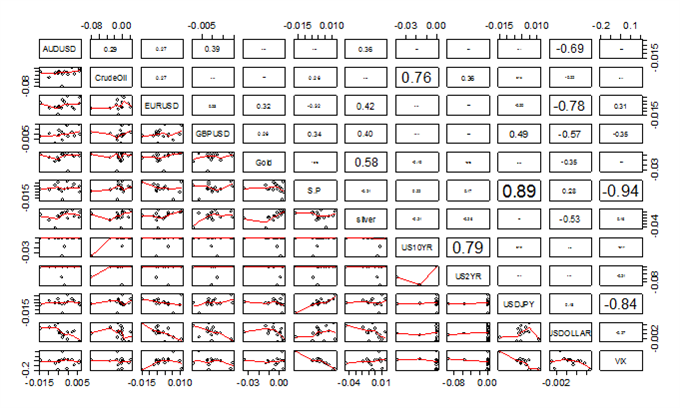