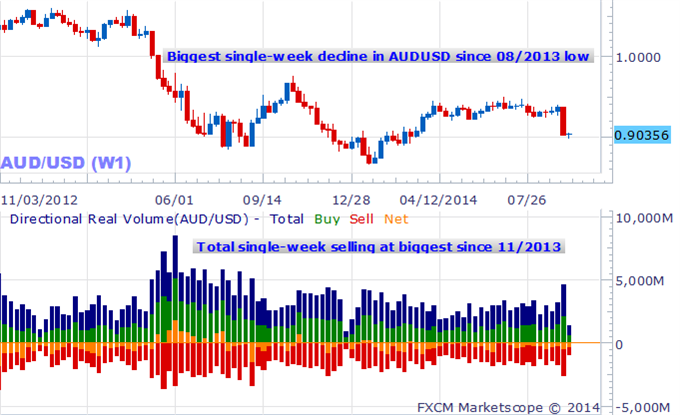 Australian Dollar Poised for Losses until These Factors Change

The Australian Dollar has fallen sharply versus the US Dollar on a surge in trader volume. Why might the AUD continue onto fresh lows before making a meaningful recovery?

Traders sent the AUD/USD exchange rate to its lowest in six months, and FXCM Execution Desk data shows that total selling of the Australian Dollar reached its highest since November, 2013. A prominent FX clearer likewise reported a record in single-week AUD selling. Clearly many are participating in this move, and we believe this favors further weakness.

Taken in isolation these are strong signals, but we likewise see other signs that the Australian Dollar may continue to depreciate through the foreseeable future.

The sharp moves and shift towards selling are all the more remarkable when we consider that speculators were heavily long the Australian Dollar just a week ago. And though the data is delayed, the heavily one-sided positions warn that there remains plenty of scope for further selling. 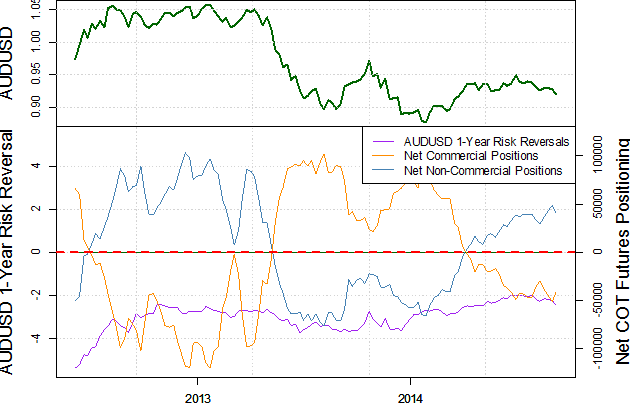 One key question remains: have the fundamental winds truly shifted in the US Dollar’s favor? A major factor behind Australian Dollar outperformance in the past year has been its yield advantage against the US Dollar and other currencies. Yet even there we see considerable risks to the Australian currency as that yield differential has shrunken considerably.

The end result is straightforward enough: the Australian Dollar remains at risk of further weakness. Our Senior Technical Strategist highlights the fact that the AUDUSD trades at significant trendline support dating back to the post-financial crisis lows.

A break below would nonetheless favor a larger decline towards year-to-date lows near $0.8660. Near-term resistance is seen at the confluence of the pair’s 52-week Simple Moving Average and congestion near $0.9200. Remaining below said level keeps our focus to the downside.