Here are the Reasons why the Japanese Yen Could Bounce Sharply

1. The Dollar has broken substantial resistance versus the Yen, but early sign of USDJPY turn is clear warning

2. Strong link to the Japanese Nikkei 225 leaves the domestic currency at risk into year-end

1. The USDJPY is at its longest win streak since January. Such a level has coincided with important turns in the past 7 years. Our Senior Technical Strategist further points out key risks of an outside-day reversal in the USDJPY. 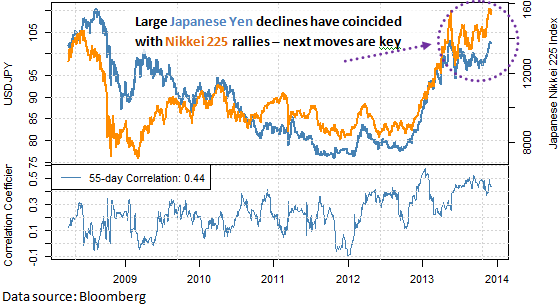 2. The strong link between the Japanese Yen and the Nikkei 225 suggests that the next major JPY move will happen on similar price action out of Japanese stocks. The Nikkei has surged towards year-to-date peaks, but it’s important to note that the index is coming up on major long-term trendline resistance.

It’s likewise worth noting that Japanese investors could sell holdings ahead of January as the domestic capital gains tax rate is set to double in 2014. The timing of any selling—if it does occur—is not obvious.

Yet it’s difficult to ignore the risk of a pullback given that the Nikkei 225 is up nearly 50 percent on a year-to-date basis.

Japanese Nikkei 225 Index is Testing Resistance Dating back to 1991

3. A noteworthy shift in retail forex positioning has led our Momentum2 trading strategy to sell the USDJPY and GBPJPY for the first time in a month. And though there’s obvious risk that this is a minor correction within a much larger uptrend, the early turn in retail trader sentiment adds weight to calls for a potential JPY reversal. 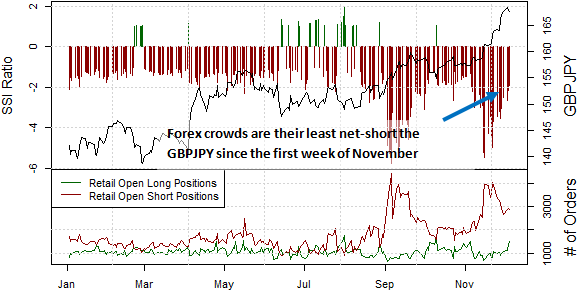 It will be important to watch the next moves in crowd sentiment. Traders remain heavily net-short the GBPJPY and similarly short USDJPY and EURJPY. We typically use our proprietary Speculative Sentiment Index data as a contrarian indicator to price action: if everyone’s short we prefer being long and vice versa.

Yet early signs of a shift alongside key technical and fundamental risks underline the potential for a Japanese Yen bounce (USDJPY pullback).