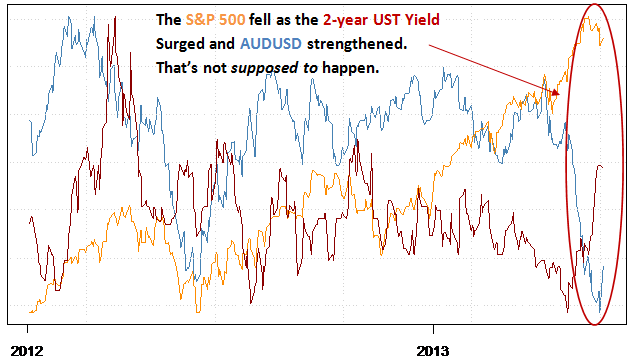 Why Do Forex/S&P 500 Correlations Say the Japanese Yen Might Surge?

Summary: Why are correlations between the Dollar (ticker: USDOLLAR), S&P 500 (ticker: SPY), and Treasury Yields (ticker: SHY) broken? And most importantly—why might this signal that the USD could tumble versus the Yen?

Market conditions are extremely unusual as the S&P 500 fell sharply, the Australian Dollar rallied, and US Treasury Yields rose all at the same time. Long-term correlations show that’s unusual to say the least—the S&P 500 has been very correlated to the AUDUSD, while long-term studies emphasize that Treasury yields typically move inversely to stock markets. What gives?

Yesterday we highlighted reasons for which it might be a huge week for forex markets. Short version: FX volatility prices are on the verge of a major surge higher, while strange conditions in other markets warn that conditions are anything but normal.

We might be on the verge of a potentially substantial stock market sell-off and broader market deleveraging on the scale we haven’t seen since the Flash Crash of 2010 and Financial Crisis of 07/08.

The critical divergence shown in the chart below is telling:

Our Senior Technical Strategist argues the reasons are simple: the“Long USD”, “Long Stocks”, “Long Bonds” trades are far too crowded—a market deleveraging would put all three at risk and helps explain the clear breakdown in correlations. How might we trade such a move?

If our hypothesis is correct and there is a dramatic deleveraging across financial markets, it makes sense to look atcurrencies/stocks/bonds in which positioning is at its most one-sided.

The chart below emphasizes that Japanese Yen positioning remains extremely short (USDJPY-long). As arguably the most popular FX trade in recent years, traders have rushed to sell the JPY as it trades to multi-year lows (USDJPY highs). 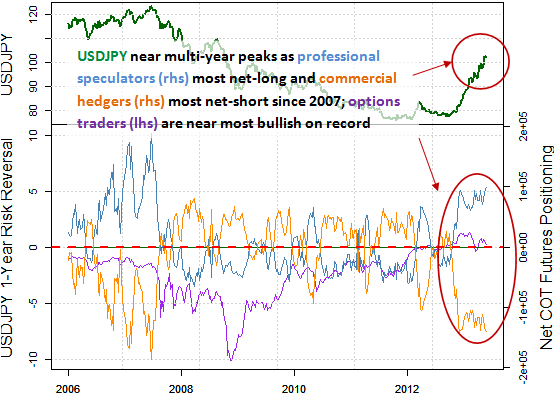 But nothing moves in a straight line, and we think the USDJPY is at obvious risk of declines.

Yet markets always look their most bullish at the top and most bearish at the bottom.

The risk is obvious: if the trade begins to turn and the Japanese Yen bounces, no one will want to be the last one holding a JPY-short position (USDJPY long). Yesterday saw a disappointing US ISM Manufacturing report act as a catalyst that sent the USDJPY below ¥100. The USDJPY breakdown forced a run on stop-losses that pushed the pair below 99 in a hurry.

The fact that the US Dollar fell more broadly emphasized the importance of the short-JPY trade: there are so many speculators long USDJPY that a major breakdown could force broader Dollar weakness. It can’t be a coincidence that the EURUSD simultaneously cleared $1.31 and the AUDUSD strengthened despite simultaneous S&P 500 declines.

It’s difficult to time trades based on Commitment of Traders data as it’s only updated once per week and even then on a delay. Thus we look to our realtime FXCM Speculative Sentiment Index data for more up-to-date analysis: 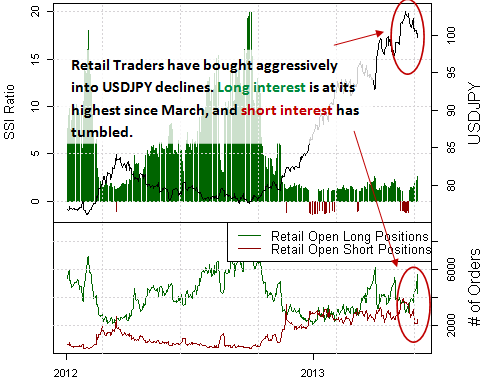 Retail speculators have grown extremely net-long the US Dollar against the Japanese Yen as it falls sharply off of recent peaks.

We most often use our proprietary Speculative Sentiment Index data as a contrarian indicator to price action. In plain English: if everyone’s buying we want to sell and vice versa. It’s no surprise to note that our sentiment-based trading strategies are short USDJPY and more broadly short the US Dollar. Here’s a summary on major pairs:

Summary of Positions in DailyFX PLUS Trading Signals 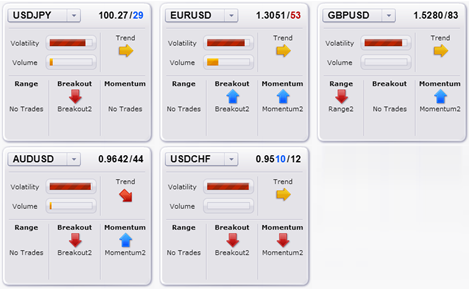 Does this all mean that the USDJPY is going to continue its recent plummet? It certainly could, though our Technical Forecast warns that ¥98.60 could provide important support.

We’ll nonetheless look for signs of potentially substantial market panic as a key reason to sell the USDJPY, and indeed that remains our favorite trade in the week ahead.

It feels like markets are on the verge of something huge. Is that hyperbole? Maybe.

But there are way too many signs that stocks/bonds/currencies might soon see substantial moves for us to ignore. 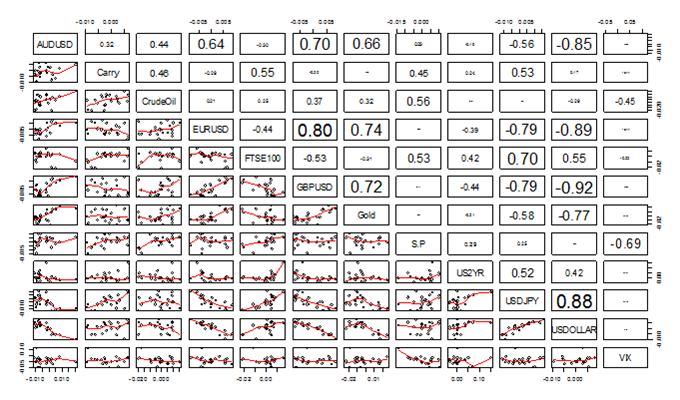 David specializes in automated trading strategies. Find out more about our automated sentiment-based strategies on DailyFX PLUS.