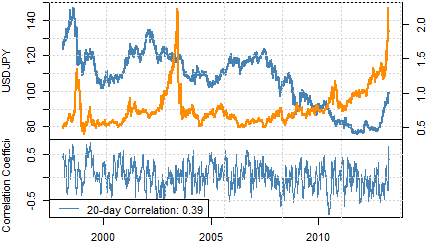 Summary: The Japanese Yen has fallen dramatically on a critical Bank of Japan decision. Here’s a list of currencies we think may do particularly well against the JPY through upcoming trading.

The US Dollar/Japanese Yen exchange rate surged and the 10-year Japanese Government Bond (JGB) Yield tumbled following the Bank of Japan’s decision to embark on hyperactive Quantitative Easing measures. Recent price action put the short-term correlation between the USDJPY and JGB’s to its strongest in over a decade.

In effect we can “explain” recent Japanese Yen weakness (USDJPY strength) by simply looking at Japanese Government Bonds. Why? After over a decade of Zero Interest Rate Policy (ZIRP) in Japan, the Japanese investor has become the largest net-creditor to the rest of the world. In other words—Japanese capital chases higher yields available abroad.

Ranking Currencies Against the Japanese Yen

All else remaining equal, we predict that extremely low JGB yields will continue to push the Japanese Yen to fresh lows against currencies with higher interest rates and better yield prospects. Unfortunately none of the major currencies really fit the bill, as almost all major government bond yields trade below their long-term moving averages.

If we can’t get a perfect fit, we can get close; the Euro seems to be in a relatively good position to benefit from Japanese investor inflows, while the Australian and New Zealand Dollars are not far behind. It does not seem completely coincidental, then, to note that post-BOJ performance lines up fairly well with yields. We expect relative interest rates to continue driving the Japanese Yen currency pairs through the foreseeable future.

Receive future correlation studies and other reports via this author’s e-mail distribution list with this link.