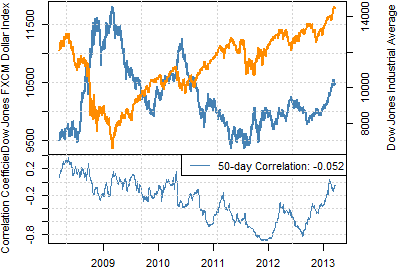 Dow at Record as Dollar hits Multi-Year Highs - What Gives?

Summary: The Dow Jones trades at record highs as the Dow Jones FXCM Dollar Index (ticker: USDOLLAR) is at multi-year peaks, but talk of a “New Paradigm” warns this is unsustainable.

The correlation between the Dow Jones FXCM Dollar Index (ticker: USDOLLAR) and the Dow Jones Industrial Average trades at its weakest and least negative in three years, and the sudden disconnect speaks volumes on market dynamics.

Some call it the “new paradigm” of “Dollar Up/’Risk’ Up” in which the traditional safe-haven does well during times of relative stock market euphoria. A sustained improvement in US economic data—particularly in February’s US Nonfarm Payrolls print—boosts growth forecasts and outlook for domestic corporate earnings. At the same time, traders are pricing in an earlier exit to the US Federal Reserve’s aggressive Quantitative Easing policies as the labor market improves.

It’s not the first time that the Dollar Index hit fresh multi-year peaks as the Dow broke to fresh records, but the last time this happened was back in 2000—when short-term US yields were close to 7 percent and the Fed Funds rate was at 9-year highs. Given that US interest rates are essentially at zero, the two instances are in our opinion not completely comparable.

I think the takeaway seems clear: something’s got to give. History tells us that talk of “New Paradigms” can be delusional attempts at justifying market developments that simply don’t add up. I don’t think it’s fair to claim that the Dollar can’t continue higher as the Dow presses highs.

Yet we’ll likely need to see a sustained improvement in data and market sentiment to justify gains in both equities and the US currency. A one-off surge in NFP’s hardly makes a trend.

Receive future correlation studies and other reports via this author’s e-mail distribution list with this link.