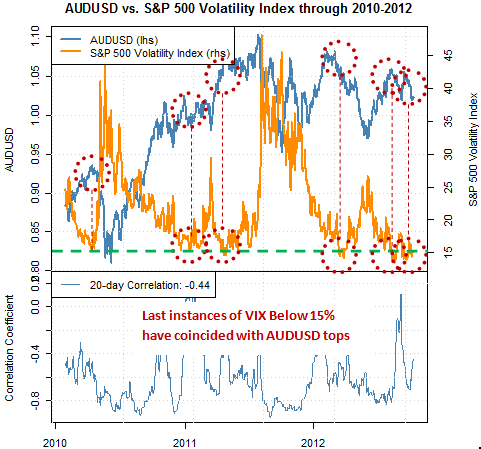 The US S&P 500 Volatility Index (VIX) trades at levels that have coincided with Australian Dollar tops versus the US Dollar. Can history repeat itself?

The US S&P 500 Volatility Index (VIX) trades near multi-year lows, and current levels have coincided with important turnarounds in the S&P and the highly-correlated Australian Dollar. Indeed, current VIX levels of approximately 15% have most recently occurred at important AUDUSD tops. Why exactly?

The so-called “Fear Index” in the VIX represents how much investors are willing to pay for protection against sharp moves in the S&P 500. If the VIX is extremely low, it tells us that investors do not fear major stock market volatility. The connection to the Australian Dollar is similarly based on market sentiment.

Why does the Australian Dollar Trade Near Multi-Year Highs?

The Australian Dollar remains the highest-yielding currency in the G10 group of currencies, and this makes it attractive to speculators as they seek high yields. Yet those interest rates will only remain attractive if they are enough to offset any exchange rate moves.

In other words—speculators prefer to buy AUDUSD as long as interest rates will offset risks of Aussie Dollar losses. According to London Interbank Offered Rates (LIBOR), the Australian Dollar currently boasts a 3.2 percent yield advantage over the US Dollar on 12-month lending.

A Bloomberg News survey shows that the median investor forecast predicts the Australian Dollar will trade at $1.00 in a year’s time—representing a 2.2 percent decline from current spot rates. Assuming such forecasts prove accurate, the 3.2 percent yield differential offers enough of a premium to offset risks of AUDUSD losses.

But there’s ample reason to believe that the Australian Dollar will not trade at $1.00 through end of Q3, 2013, and the first sign of danger could easily offset the Aussie’s yield advantage.

Past performance is not indicative of future results, but previous instances in which the S&P 500 VIX has traded below 15% have coincided with important AUDUSD tops. That happened once more on Friday, October 5, and this could point to a similar near-term AUDUSD top. 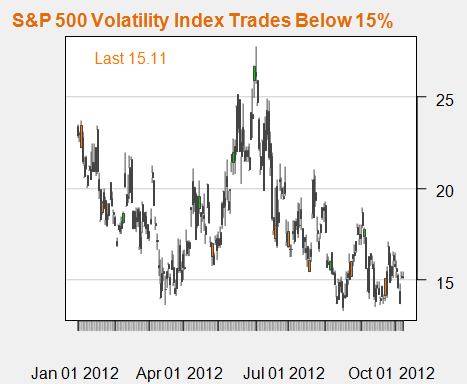