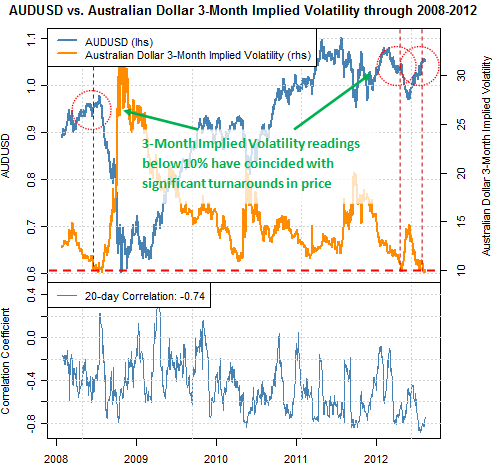 Aussie Dollar Volatility and Sentiment Called for Top – Now What?

Australian Dollar volatility and sentiment readings recently hit extremes that have historically coincided with important tops, and more recent price action suggests this may be in fact the turnaround we’ve anticipated.

Volatility has since bounced from multi-year lows, while sentiment has likewise corrected from previous peaks and our SSI-based “Tidal Shift” strategy has since sold AUDUSD. We believe that the turns in volatility and sentiment support calls for an important Australian Dollar top.

Last week we wrote that extremely low levels of volatility expectations warned of a significant Aussie Dollar turnaround. According to 3-month AUDUSD options prices, vols fell to their lowest levels since the pair set its all-time peak in 2008.

A strongly negative correlation between the Australian Dollar/US Dollar pair and volatility helps explain why the AUD has rallied to multi-year peaks. Yet a 3-month reading below 10% has coincided with market turning points in the past, and indeed we may see such low levels as warning that markets have become extremely complacent.

Volatility is mean-reverting; if vols are too low for too long, it can subsequently surge. There is obviously no way to know what is “too low”, and timing a reversal is exceedingly difficult. Yet early evidence lines up with other signs that the Australian Dollar could soon see an important correction. The strongly negative correlation between volatility and the AUDUSD implies that the pair stands to drop sharply on such a reversal in vols. 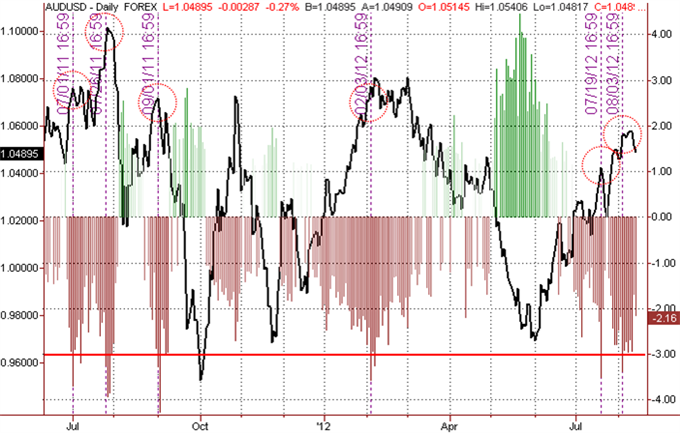 The chart above shows that SSI ratios at or below -3.0 have coincided with several important AUDUSD tops dating back to July, 2011. The fact that Aussie Dollar SSI recently hit as low as -3.4 marked a potential sentiment extreme.

The SSI has more recently traded to -2.2 as traders close positions into AUDUSD declines, and our sentiment-based “Tidal Shift” system went short as of 8/13 at $1.0537. We wrote last week: “As the name implies, said system looks to catch a major shift in the so-called tide (trend). Past performance is not indicative of future results, but we’ll keep a close eye on the SSI and the Tidal Shift system as it has historically caught important tops/bottoms across major currency pairs.”

Volatility Levels and Sentiment Pull Back – Is this the Turnaround?

Australian Dollar volatility and sentiment have remained near extremes for some time now, and the most recent pullbacks in both trader positioning and vols warn that this may be the start of a major turnaround. We can’t emphasize enough that timing reversals is extremely difficult, and in fact our SSI-based “Tidal Shift” strategy more often produces losing trades than winners.

Yet it’s difficult to ignore early signs that this may in fact be the Australian Dollar top we’ve anticipated. It will be critical to watch whether the AUDUSD holds recent lows of $1.0435, and our Senior Technical Strategist believes that a break below could provide confirmation of the Aussie Dollar top.