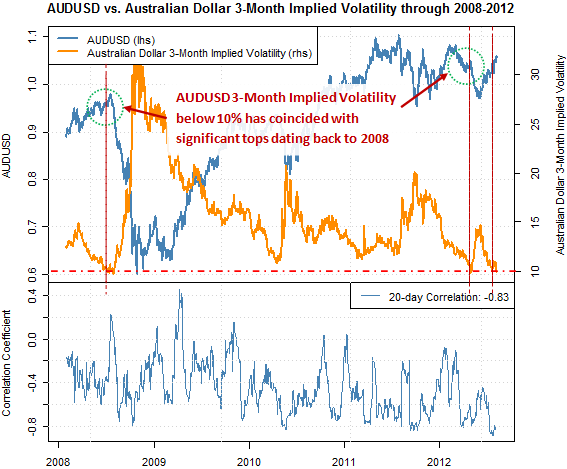 Australian Dollar Volatility and Sentiment Warns of Major Top – When?

Australian Dollar/US Dollar options show that 3-month volatility expectations have fallen below the 10% mark for only the third time since 2008, and directional sentiment on those same AUDUSD derivatives warns that traders are at their most relatively bullish since the pair traded towards record-peaks through 2011.

Implied volatility on 3-month Australian Dollar options now trades below the psychologically significant 10% mark for only the third time since 2008, and previous instances have coincided with important AUDUSD tops. Why that might be the case?

The Australian Dollar continues to benefit from speculative flows as it boasts the highest interest rates of any G10 currency. According to overnight London Interbank Offered Rates (LIBOR), the AUD offers a substantial 3.5% yield advantage over the US Dollar. Such a differential helps explain why the CFTC Commitment of Traders report shows speculative futures traders are their most net-long AUDUSD since early May. FX Options risk reversals also show options traders are near their most relatively bullish since the pair traded towards record peaks through Q2, 2011.

On the face of it, the sharply negative correlation between the AUDUSD and volatility points to further Australian Dollar gains. Yet the risk of reversal is especially high given the clear levels of complacency across FX options markets. 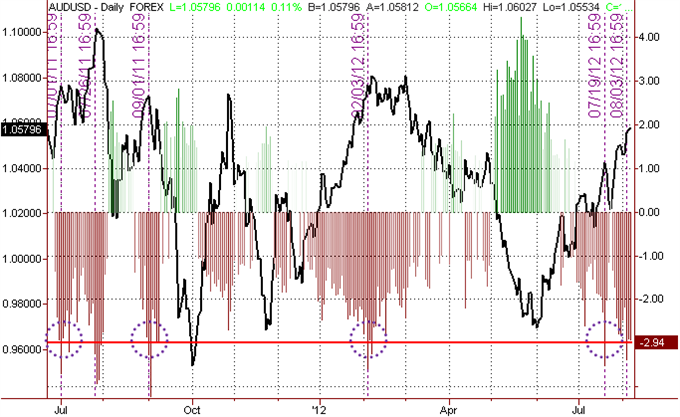 According to FXCM execution desk data, there are nearly 3 retail traders short AUDUSD for every one that is long. We would most often take a contrarian view of retail trading crowd sentiment; if most traders are short, we prefer going long. Yet an AUDUSD SSI ratio of -3.0 has coincided with several significant tops dating back to mid-2011.

Volatility Levels and Extreme Forex Sentiment Warn of AUDUSD Top – But When?

Forex correlations with volatility, one-sided speculative futures and options positioning, and extreme retail crowd trading sentiment warn of a significant Australian Dollar top. Yet timing major turnarounds is extremely difficult, and in fact our own SSI-based trading strategies most recently went long AUDUSD. How then might we attempt to trade the reversal?

If we see substantial capitulation from retail FX traders and a shift towards buying, our SSI-based “Tidal Shift” strategy would likely go short the AUDUSD. As the name implies, said system looks to catch a major shift in the so-called tide (trend). Past performance is not indicative of future results, but we’ll keep a close eye on the SSI and the “Tidal Shift” system as it has historically caught important tops/bottoms across major currency pairs.

Given clear risk of AUDUSD reversal, such a trade in our opinion offers strong risk/reward and we’ll look to trade accordingly.