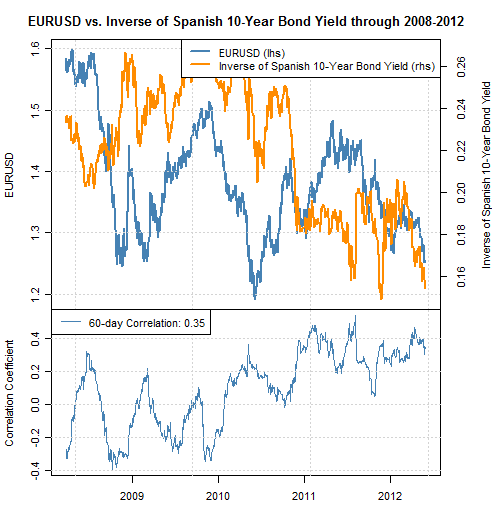 The Euro fell to fresh multi-year lows as Egan Jones downgraded Spain’s sovereign debt rating yet again, and cross-market correlations suggest the EURUSD could continue falling on a surge in Spanish bond yields. The short-term link between Spanish 10-Year Government Bond Yields and the Euro/US Dollar trades near record strength.

During the heights of the global financial crisis in 2008, it was popular to call many large banks and financial institutions “too big to fail”. Given that Spain’s economy is nearly 5 times the size of Greece, we think it’s “too big to bail out”.

Further Euro Zone debt struggles are all but guaranteed, and the Spanish fiscal crisis could force further EURUSD losses.

The Euro has tumbled to its lowest levels against the US Dollar (ticker: USDOLLAR) since 2010 as investors flee the risk-sensitive EUR in favor of the safe-haven US currency. We saw the Euro fall to fresh lows as ratings agency Egan Jones downgraded Spanish debt and left outlook on future ratings ‘negative’.

Spanish bond yields have surged near their highest levels in decades—a clear sign that investors increasingly price in the risk of default or at the very least great funding difficulty. Bond yields move inversely to price, so a sell-off in Spanish bonds would lead to higher borrowing costs for the Spanish government.

Given that Spain is the fourth-largest economy in the Euro Zone, it remains critical to watch whether the Spanish government is able to meet deficit and debt financing needs. That said, we see no easy resolution to this crisis in confidence, and further drops in Spanish bond prices/rise in yields could push the Euro to further lows.