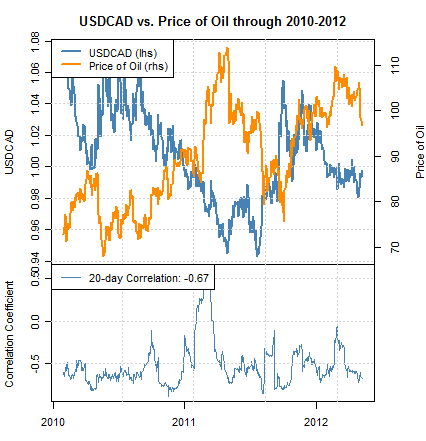 Crude Oil Tumbles Could Force US Dollar to Surge vs. Canadian Dollar

Sharp losses in Crude Oil prices have sent the US Dollar (ticker: USDOLLAR) higher against the Canadian Dollar, and further losses would favor USDCAD gains.

Commodities such as Crude Oil, Gold, and Silver have sold off sharply amidst clear tensions across financial markets—sending the US Dollar higher. This effect is particularly pronounced against commodity-sensitive currencies such as the Canadian Dollar, Australian Dollar, and New Zealand Dollar.

The short-term correlation between Crude oil prices and the Canadian Dollar trades near record strength, and further Crude Oil weakness would likely result in USDCAD gains. The NYMEX contract trades dangerously close to year-to-date lows near the $95.44. A substantial break lower could force the USDCAD to trade above critical resistance at C$1.0050.

The US Dollar (ticker: USDOLLAR) remains strongly correlated to oil prices, and that link is especially strong between the USD/Canadian Dollar exchange rate and the NYMEX WTI Crude Oil Contract. The Canadian Dollar sold off sharply (USDCAD rallied) as oil prices saw their biggest single-week decline since September, 2011.

Could another $8.50 decline in Crude Oil prices be enough to push the USDCAD to $1.0660? History says it should be. Yet Canadian Dollar positioning shows a surge in speculative USDCAD short positions. In other words—many people are positioned for weakness and would not likely let the USDCAD break higher without a fight.