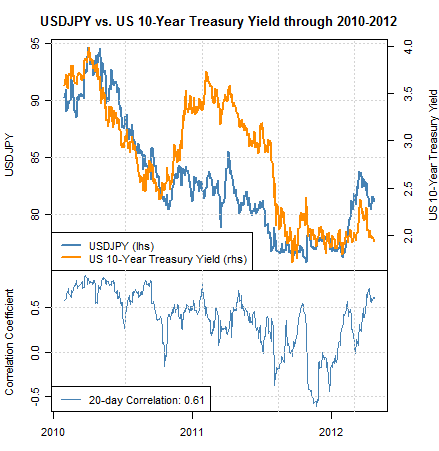 The US Dollar (ticker: USDOLLAR) may have set a long-term bottom against the Japanese Yen, but recent weakness in US Treasury Yields suggests the USDJPY may trade lower and offer better long opportunities in weeks ahead.

The US 10-year Treasury Yield may have set a long-term bottom as the USDJPY likewise hit important lows, but more recent weakness suggests that the highly-correlated Yen pair could trade lower. The short-term link between Treasuries and the USDJPY trades near record-strength, and it remains critical to watch the US Federal Reserve’s next moves as any shifts in rhetoric could have a profound effect on interest rates.

The US Dollar (ticker: USDOLLAR) remains closely linked to US Treasury Yields, and that correlation is nowhere stronger than the US Dollar/Japanese Yen exchange rate. In fact we argued that a major bottom in US Treasury yields pointed to a similar bottom in the USDJPY.

Yet more recent price action in Treasury Yields limits optimism for near-term USDJPY gains. The 10-year Note Yield has fallen steadily below the psychologically significant 2.00% mark, and it likewise trades below its 50, 100, and 200-day Simple Moving Averages as of last week.

It is difficult to call for further USDJPY strength given weakness in yields; there is a long-standing fundamental relationship between the Japanese Yen and global interest rates. Given nearly 20 years of domestic interest rates near zero percent, Japanese investors are among the most yield-sensitive in the world. If US bond yields fall relative to those available in Japan, investments in the United States become less attractive.

We will continue to watch US Treasuries and their relationship to the USDJPY going forward. It may take a noteworthy jump in Treasury yields to force the USDJPY higher. Viewed in this light, the US Federal Reserve’s guidance on interest rates may prove critical to the trajectory and forecasts for the US Dollar/Japanese Yen pair.