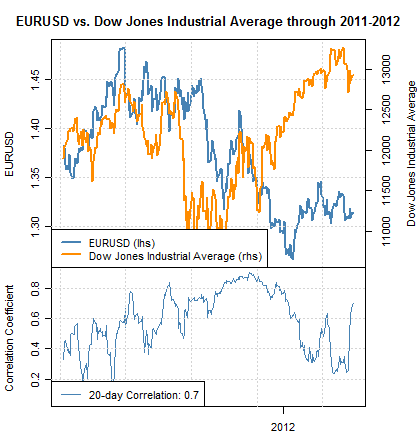 European bonds have sold off sharply as fiscal troubles intensify for Spain and Italy, but the Euro remains stable against the US Dollar. Why?

The US Dollar remains weak against the Euro and broader major currencies as the US S&P 500 trades to multi-week highs and threatens multi-year peaks. Why? Yields on US Treasuries and short-term interest rates carry great influence on the USD and broader FX dynamics.

We expect that the EURUSD may continue to hold recent lows if the S&P and broader risky assets trade to fresh highs. Yet a turn lower in the S&P 500 would quickly change that dynamic and likely push the Euro to fresh lows.

Important deterioration in Spanish and Italian bond markets should have been enough to sink the Euro significantly lower against the safe-haven US Dollar (ticker: USDOLLAR), but we see that the Euro remains far more correlated to the high-flying S&P 500 and broader risky asset classes.

We would argue that the Euro “should be” significantly weaker against the Greenback as the Spanish 10-year Government Bond yield trades at its largest spread versus the benchmark German yield since the height of sovereign crises in late 2011. Why isn’t the Euro lower? The EURUSD seems to benefit from recent strength in the US S&P 500 and regional European stock indices. Why might this be the case?

Extremely low US interest rates mean that the US Dollar is in a three-way tie for the lowest deposit rates among major world currencies. This makes it expensive to hold US Dollars; with the exception of the Japanese and Swiss Franc, investors may collect higher yields in other currencies. In other words: most prefer not to hold USD if there are higher returns elsewhere.

Yields help explain why the US Dollar may fall against the Euro when the S&P and other high-return asset classes outperform; there are simply better yields available elsewhere. Yet that dynamic could work in reverse if investors fear sharp losses in risky assets, and the dueling forces suggest the S&P 500 may remain correlated to the US Dollar through the foreseeable future.

The Euro remains surprisingly strong despite regional troubles, but a reversal in the S&P 500 could quickly change that and force the EURUSD lower.