Why is the Australian Dollar Correlated to the US S&P 500?

The correlation between the Australian Dollar and S&P 500 has strengthened as stocks take out multi-year highs. We see fundamental reasons why the AUDUSD will remain strongly linked to the S&P and it could favor further AUD strength.

The US S&P 500 has surged to fresh post-financial crisis highs, and the Australian Dollar trades stronger on the heels of stock market rallies. Indeed, we forecasted that the US Dollar (ticker: USDOLLAR) could return to fresh lows against the Austrailian Dollar.

We see a major fundamental reason for why the AUDUSD-S&P 500 correlation will remain strong: interest rates. The Australian Dollar boasts the highest interest rate of any G10 currency, while the US Dollar is in a three-way tie for the lowest.

Unless the US Federal Reserve or Reserve Bank of Australia significantly alter expectations for US and Australian interest rates, expect the Australian Dollar/US Dollar exchange rate to move with similar volatility in global stock markets. 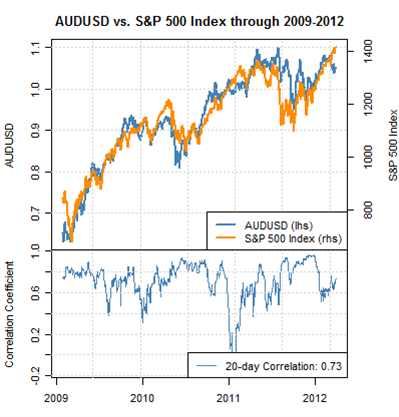 Correlation between Australian Dollar and US S&P 500

There is a clear fundamental reason for why the Australian Dollar will likely remain correlated to the US S&P 500 through the foreseeable future: yield differentials.

Last week we wrote that the AUDUSD and S&P 500 correlation was trading near its lowest levels in many months, but a sharp rally in both stocks and the Aussie Dollar suggests that the correlation is back and nearly as strong as ever. Indeed, we were confident it would return to strength as the reasoning falls to pure market fundamentals.

The Australian Dollar boasts the highest interest rate of any G10 currency, while the US Dollar is near the lowest. According to London Interbank Offered Rates (LIBOR)—the price at which banks lend to one another in the interbank markets—the overnight US Dollar rate is a mere 0.15% while the equivalent Australian Dollar yield is 4.42%.

In theory this means that an investor would stand to gain 4.27% annual yield for simply borrowing US Dollars to buy its Australian counterpart. In practice one would not collect this full yield due to spreads paid on interest rates, but the net yield should still be fairly significant.

That yield becomes all that much more important if the AUDUSD exchange rate remains unchanged or appreciates, but the investor could lose significantly if the Australian Dollar falls at a greater than 4.27% rate on an annualized basis. To put that into perspective, an AUDUSD exchange rate of $1.0480 implies that an investor would lose if the Aussie fell more than 1.7 pips ($0.00017) per day against the US Dollar. (Based on a 250-day yearly trading calendar and using the assumption the investor receives the full 4.27% yield differential)

If investors don’t fear AUDUSD declines, they might gladly take that risk in expectations that yields would reward them over the course of the year. Of course the opposite is also true: they would likely run for the exits if the Aussie looks like it will fall significantly against its low-yielding US namesake.

This dynamic explains why the Australian Dollar will likely remain correlated to the US S&P 500 and other speculative assets through the foreseeable future. Can that correlation break down for weeks at a time? Of course. Past performance is not indicative of future results.

Yet it would take a substantial shift in yields to truly turn the AUDUSD’s link to the S&P and other markets. Look to Reserve Bank of Australia and US Federal Reserve as the two entities who could alter this dynamic via changes in Australian and US interest rates.