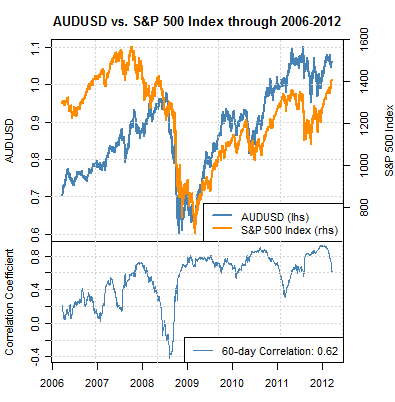 A surge in US Treasury Yields may help explain a sudden breakdown in the correlation between the Australian Dollar/US Dollar and S&P 500. Yet it would likely take a much larger shift to break it entirely, and further S&P strength favors AUDUSD gains.

The US S&P 500 trades at its highest levels since the global financial crisis in 2008, while the Australian Dollar/US Dollar pair trades near the middle of its year-to-date range. The clear disconnect suggests the correlation may have broken down. Yet the Aussie Dollar continues to offer a substantial yield advantage to its US namesake, and this may ultimately be the most important driver of AUDUSD moves through the foreseeable future.

Correlation between Australian Dollar and US S&P 500

The S&P 500 Index trades at fresh multi-year highs, while a recent breakdown in correlation between the S&P and Australian Dollar leaves the AUDUSD near the middle of its year-to-date range. We would argue that the sudden surge in US Treasury Yields and more modest improvement in US Federal Reserve interest rate expectations has much to do with this. Yet it would take a much more substantial correction in yields to break the correlation completely.

The Australian Dollar boasts the highest interest rate of any G10 currency, while the US Dollar is near the lowest. The Aussie central bank (Reserve Bank of Australia) has its benchmark Overnight Cash Rate at 4.25%, while the US Fed’s Federal Funds rate is at best a paltry 0.25%. The yield spread should theoretically pay investors 4.00 percent to hold leveraged AUDUSD positions. Unless we see a more substantial shift in Fed rate forecasts and/or significant downgrades in RBA expectations, we expect the correlation will remain mostly intact.

We expect that the AUDUSD may continue to fresh highs as investors plow head-long into the S&P 500 and other speculative investments. 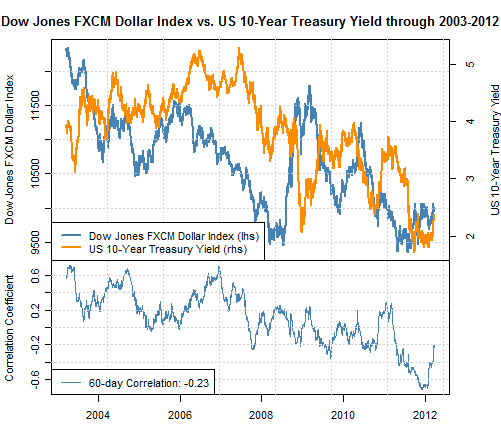 The correlation between the US Dollar (ticker: USDOLLAR) and the US 10-Year Treasury Note Yield has been strongly negative for much of 2011 and into 2012. Yet more recent market volatility suggests that the tide may have turned, and the US currency may stand to gain on a continued jump in domestic yields. Indeed, we argue that the US Dollar set a significant bottom against the Japanese Yen as the 10-year Treasury Yield closed above its 200-day Simple Moving Average.

Does this spread to other USD pairs such as the Euro/US Dollar or British Pound/US Dollar? We are not entirely sure. It seems as though the USDOLLAR initially spiked higher when Treasury yields broke above key resistance. Yet the uptrend in yields has persisted while the US Dollar pulled back at key resistance against the Euro and British Pound (EURUSD and GBPUSD resistance).

We expect that higher Treasury Yields could continue to support the US Dollar against the Japanese Yen. That lines up with the recent turn in correlation between the 10-year Treasury and the Dow Jones FXCM Dollar Index. Yet the implications of Treasury moves versus the Euro, British Pound, and Australian Dollar are far less clear. As it stands, the biggest driver of AUDUSD, EURUSD, and GBPUSD moves seems to be the US S&P 500 Index and broader financial market risk appetite.