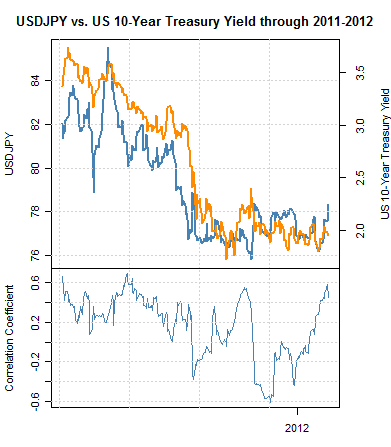 The Japanese Yen has fallen sharply against the US Dollar as the Bank of Japan sinks domestic bond yields, while the Australian Dollar offers superior yield differentials to the SPDR S&P 500 ETF Trust as a proxy for the US S&P 500 itself.

Past performance is not indicative of future results, but we believe the USDJPY will continue to track yield differentials while the AUDUSD remains an attractive proxy to holding positions in the US S&P 500.

The US Dollar/Japanese Yen exchange rate has surged as the Bank of Japan announces aggressive monetary policy easing, while comparatively firm expectations for the US Federal Reserve leave the US Dollar on stronger footing. The Japanese central bank announced that it would further expand its balance sheet and create more Yen by purchasing Japanese Government Bonds (JGBs).

This pushed JGB yields lower, while US Treasuries remained unchanged.

We believe that the US Dollar stands to gain further against the Japanese Yen on the Bank of Japan’s recent actions. Given the strong correlation between the USDJPY and yield differentials, interest rate and monetary policy expectations should be enough to lift the USDJPY steadily off of record lows. 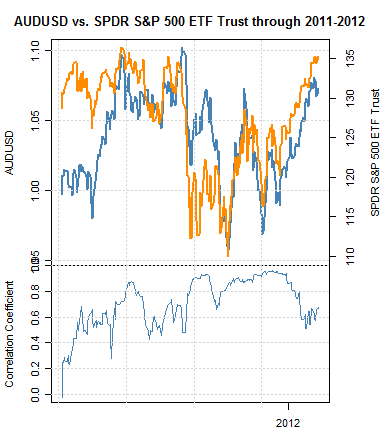 The Australian Dollar remains strongly correlated to the US S&P 500 Volatility Index, offering an interesting proxy to trading the US stock market. Australia boasts the highest short-term interest rates of the G10, and Aussie Dollar/US Dollar positions offer one of the biggest interest rate differentials for major currencies.

The SPDR S&P 500 ETF Trust tracks the US S&P 500 with near-perfect accuracy. Yet based on dividend yield alone, the Australian Dollar seems like an attractive alternative to the popular ETF. According to Google Finance, the Dividend Yield of the SPY currently stands at 1.91%. The spread between overnight interbank rate in Australian and US Dollars stands at a significant 4.27%. FX traders won’t receive that full spread due to transaction costs, but the spread will remain superior.

The major risk in using the AUDUSD as a proxy for trading the S&P 500 is that the correlation will break down. Yet we see few reasons for why that might happen, and indeed the link remains strong through recent trading.