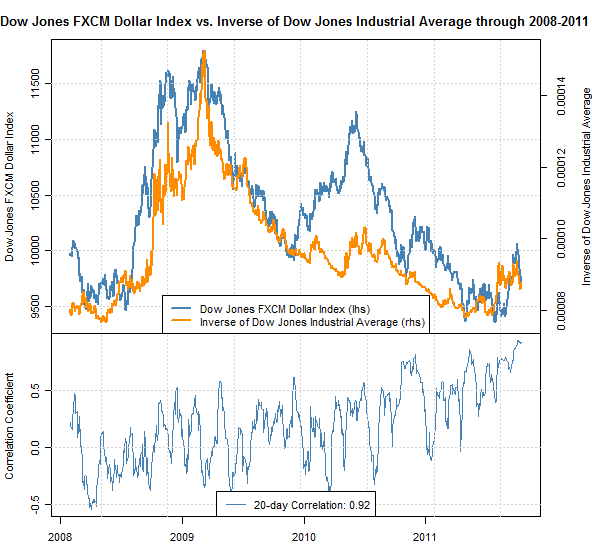 Forex market correlations to the Dow Jones and broader financial markets continue to trade near records, and currencies have likewise tracked commodity price moves with strong accuracy. Overall, these strong correlations imply that currencies can be traded as reasonable proxies for moves in other markets.

Strong currency correlations suggest that markets will mostly continue to move in tandem. This means that it remains critical to monitor moves in stock market and broader financial market sentiment when trading the US Dollar, Australian Dollar, and other major world currencies.

The correlation between the Dow Jones FXCM Dollar Index (ticker: USDOLLAR) and the Dow Jones Industrial Average continues to trade near record strength. The safe-haven US currency continues to track moves in financial market sentiment with record accuracy, and it remains important to track broader market moves if trading the Greenback.

As the currency with the third-lowest short-term interest rate of any major global economy, the USD has remained a speculator’s favorite as traders borrow US Dollars to fund investments in higher-yielding assets.

In normal, quiet times, an investor stands to gain if they borrow US Dollars cheaply to buy riskier assets such as the Dow Jones and even other currencies such as the Australian Dollar. Yet when markets grow strongly risk averse and the Dow Jones tumbles, those same traders will often close those same US Dollar-short positions and send the Greenback sharply higher.

Expect the USDOLLAR to continue its fairly recent declines if the Dow Jones continues to recover from previous declines. 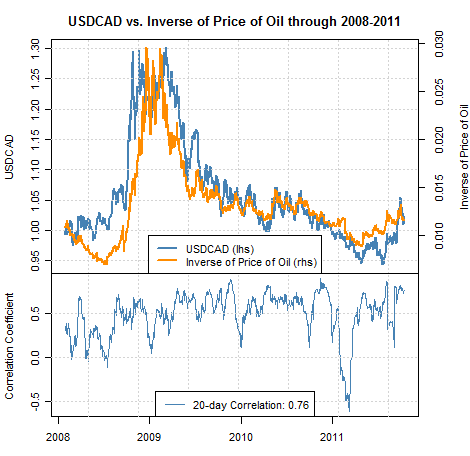 The Canadian Dollar has recently been trading in virtual lock-step with the price of crude oil, cementing its position in the “commodity bloc” of currencies. On one side of the trade, it seems as though investors have been buying Crude Oil and other hard commodities as a hedge against US Dollar weakness. On the other, the Canadian economy remains a large net-exporter of crude oil and its currency is accordingly sensitive to sharp moves.

We expect the USDCAD to continue acting as a (negatively) correlated proxy to Crude Oil prices. 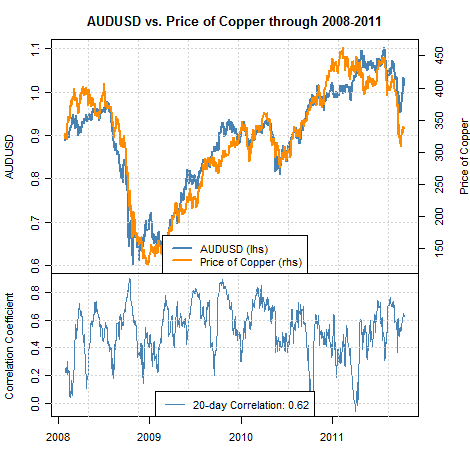 Australian Dollar/US Dollar Currency Pair versus the Price of Copper

Thus if you believe that such growth will continue, the AUDUSD could continue its overall uptrend. Of course the opposite could likewise be true: a drop in demand for copper and other base metals could push the Australian Dollar lower.