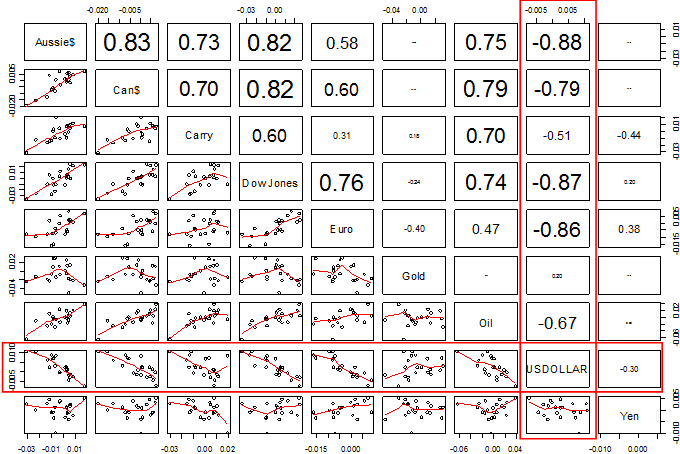 The Greenback remains heavily correlated to the Dow Jones as well as Crude Oil prices, but it is significant to note that it has moved mostly independently of gold prices. Recent shifts in market dynamics show that the historically strong link between gold and key currencies has weakened considerably—dimming the appeal of currency trades as proxies for investments in gold.

Instead of using currencies as a proxy for moves in gold prices, recent correlations suggest that the US Dollar remains a viable alternative to the Dow Jones itself. If you believe that the Dow is headed to fresh lows, watch for the USDOLLAR to test and potentially break above the psychologically significant 10,000 mark. 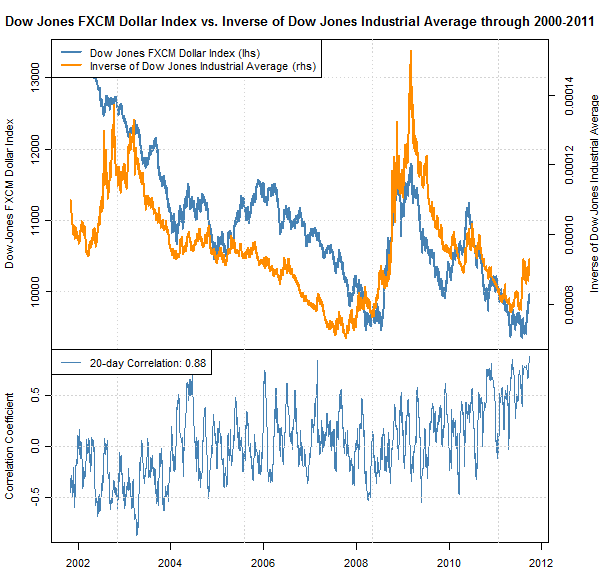 The correlation between the Dow Jones FXCM Dollar Index (ticker: USDOLLAR) and the Dow Jones Industrial Average has literally never been stronger, underlining the US Dollar’s sensitivity to broader moves across financial markets. As the currency with the third-lowest short-term interest rate of any major global economy, the USD has remained a speculator’s favorite as traders borrow US Dollars to fund investments in higher-yielding assets.

In normal, quiet times, an investor stands to gain if they borrow US Dollars cheaply to buy riskier assets such as the Dow Jones and even other currencies such as the Australian Dollar. Yet when markets grow strongly risk averse and the Dow Jones tumbles, those same traders will often close those same US Dollar-short positions and send the Greenback sharply higher.

Expect the USDOLLAR to continue to appreciate if the Dow Jones Industrial Average falls to further lows. 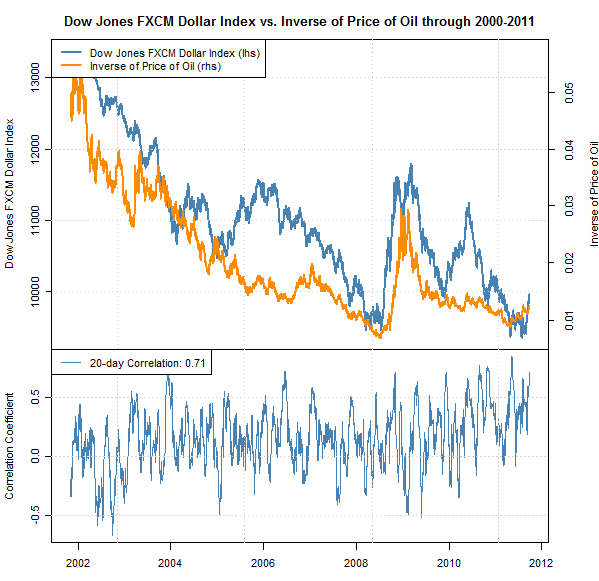 The Dow Jones FXCM Dollar Index has remained strongly correlated to NYMEX WTI Crude Oil prices, and the short-term link between the two trades near record strength. Crude Oil and other hard commodities have often served as a hedge against US Dollar weakness. If investors believed that the USD was going to depreciate, they could buy commodities such as crude oil to protect against Greenback declines.

Of course, strong US Dollar appreciation limits the appeal of any such hedges. We have subsequently seen Crude Oil prices drop noticeably as the USDOLLAR rallies. We expect to see similarly correlated moves out of the USDOLLAR and oil prices going forward. 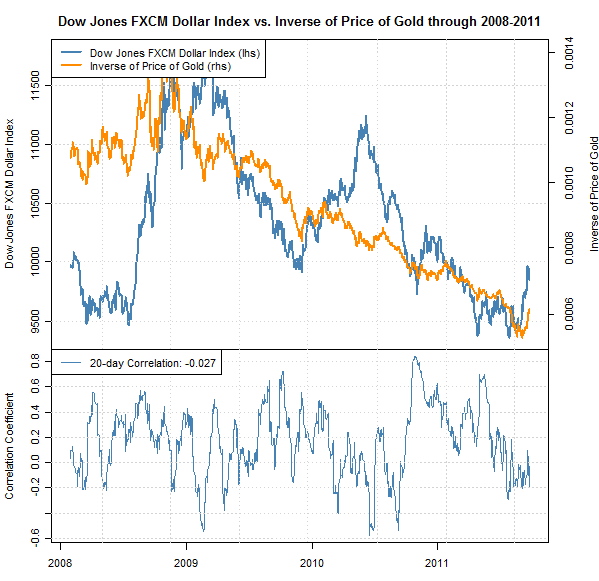 The correlation between the US Dollar (ticker: USDOLLAR) and gold prices has weakened significantly, suggesting that gold has largely lost its appeal as a hedge against Greenback weakness. Historically, investors have bought the precious metal when they believed there was significant risk of inflation and/or US Dollar weakness. More recently, gold price moves have seemed relatively disconnected from Greenback price action.

It seems as though gold is now relatively uncorrelated from the US currency and other assets. The takeaway is admittedly unclear; if you believe that the effect is temporary, we could expect that spot gold prices would soon track the US Dollar quite closely. Yet this could likewise mark a significant shift for the precious metal. It will be important to watch how gold prices trade in relation to the US Dollar going forward.