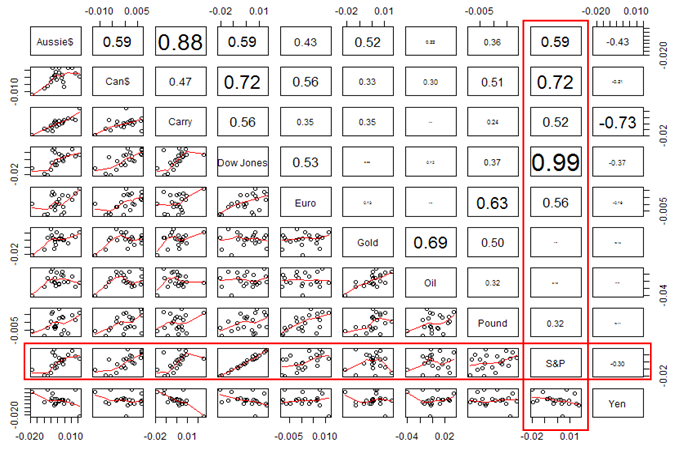 Forex Correlations: US Dollar to trade off of S&P 500 Moves

Forex correlations to the US S&P 500 continue to trade near record-highs as the high-flying Australian Dollar and its safe-haven US namesake trade virtually tick-for-tick with the popular equities index.

Sustained rallies in the S&P 500, Gold, Crude oil, and other leveraged markets have coincided with similar strength in the Australian Dollar and other risk-friendly currencies. The safe-haven US Dollar has clearly been among the biggest losers amidst strength in ‘risk’, and continued S&P strength would quite likely force further Greenback declines.

The AUDUSD, USDCAD, and EURUSD currently present good proxies for bets on equity indices. Given the extent of leverage across risky asset classes, we would expect any significant turn lower in the S&P to produce material US Dollar strength against these key counterparts. Fresh highs in equities could alternatively push the AUDUSD to new record highs as the USDCAD remains well within its downtrend.

Australian Dollar and US S&P 500 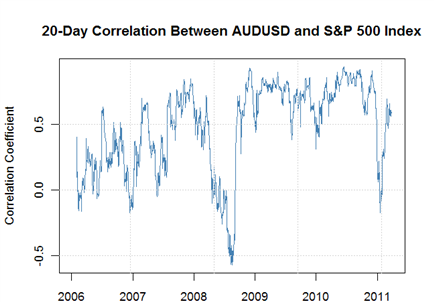 The Australian Dollar and US S&P 500 Index continue to move on a near tick-for-tick basis. The high-yielding Aussie dollar has attracted significant speculative capital on strong financial market risk appetite, but any sudden shifts in risk sentiment just as easily force noteworthy declines. We saw this quite clearly when the AUDUSD tumbled on dramatic Japanese Nikkei 225 sell-offs. Financial markets remain tense on various sources of geopolitical risk around the world. Traders should keep an eye on financial market risk sentiment and the previously high-flying Australian Dollar. 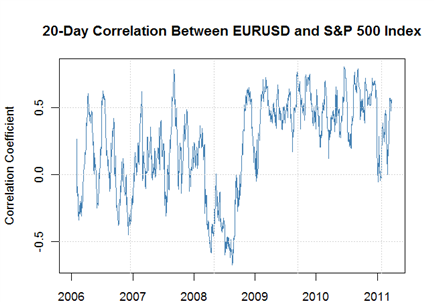 The Euro’s link to the S&P 500 has likewise strengthened as leveraged bets increasingly move in tandem across financial markets. Recent CFTC Commitment of Traders data shows that net Non-Commercial EURUSD positioning remains near its most net-long since 2007, and such one-sided positioning warns that a rush for the exits could spark dramatic EUR losses. It will be very important to watch the S&P’s trajectory and broader moves in financial risk sentiment to gauge the likelihood of a more sustained EURUSD correction.

US Dollar/Canadian Dollar and US S&P 500 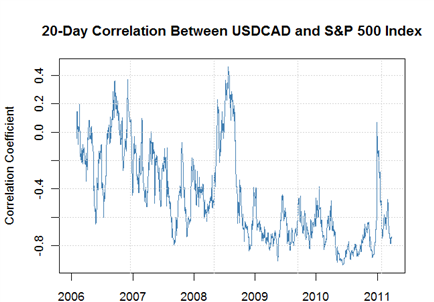 The previously high-flying Canadian Dollar remains very closely correlated to the US S&P 500 and broader risk sentiment—warning that a turn lower in stocks could force further losses (USDCAD rallies) through upcoming trade. In fact, the S&P-USDCAD correlation is currently far stronger than the USDCAD link to Crude Oil prices. The slightly unusual shift emphasizes that the Canadian Dollar could fall sharply on a turn lower in stocks. Of course, further S&P gains could just as easily put pressure on the safe-haven US Dollar and drive continued USDCAD losses.

We always want to hear your feedback on new DailyFX articles. Send e-mails to drodriguez@dailyfx.com.