Japanese Yen Technical Analysis: USD/JPY Could Use A Break

The US Dollar continues to gain against the Japanese Yen as it has since the end of March. USD/JPY bulls have now pushed the pair back up to the point where its next upside test will be the peaks of February. They come in around 110.30, which is not very far at all above the market judged by a look at the daily chart. 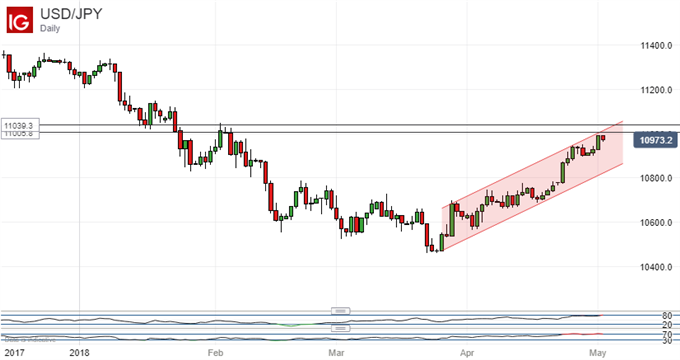 With the current dominant uptrend channel under no obvious significant threat, a test of resistance supplied by those February highs looks inevitable.

And indeed it looks justifiable enough from a technical perspective too. The US Federal Reserve is not thought likely to raise interest rates on Wednesday, but it is expected to keep the door wide open to a move higher in June. Contrast this with a Bank of Japan thought unlikely to tighten its own monetary policy for months and the US Dollar’s already considerable yield-based attractions are more than clear.

However, USD/JPY’s Relative Strength Index suggests that the pair is now rather overbought. Given that, a conclusive break above those February peaks might prove an irresistible sell to some holders, even if it doesn’t mean a huge reversal lower for the Dollar.

Don’t forget that those peaks guard the year’s highs. If an attempt on them is to be made, it would probably have to come after a period of consolidation. Falls will probably find support at 108.68 which would be the first Fibonacci retracement of the climb up from late March.

Meanwhile the UK Pound has been driven lower against many major rivals as investors rethink the likelihood of any more interest rate hikes in the light of weaker economic data. The Yen has benefitted from this weakness even as it has languished against the US Dollar. 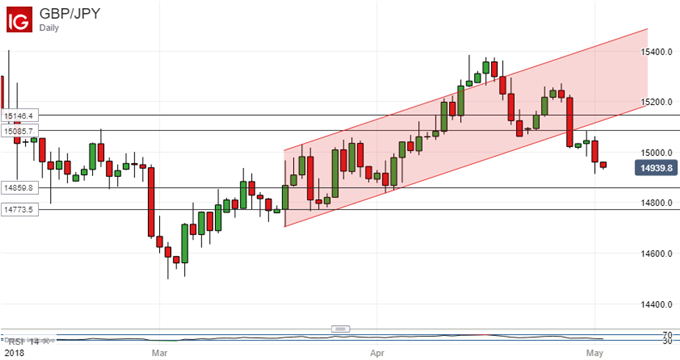 GBP/JPY has now broken well below the previously dominant uptrend channel. Focus is now on the lows of late March and, given the pace at which bearish momentum is building, it would be surprising if the cross didn’t get at least that far down.