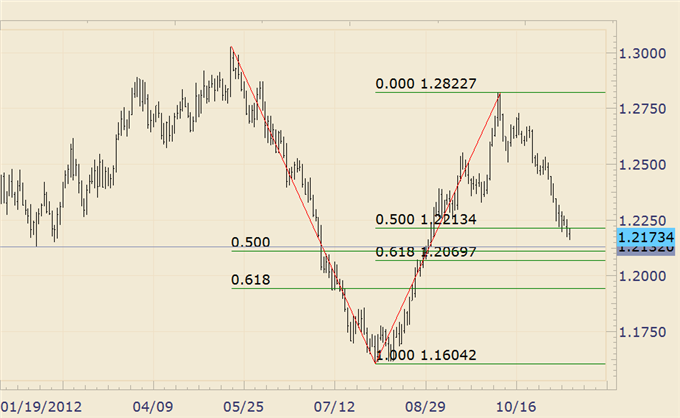 FOREX Trading: Momentum and the first day of the month high are consistent with a bearish trend throughout November. Still, the cluster of technical support surrounding 12100 suggests that the level will be difficult to break. I’ll be on the lookout for exhaustion between 12100 and 12070 for a bounce (probably corrective) into 12242-12318. 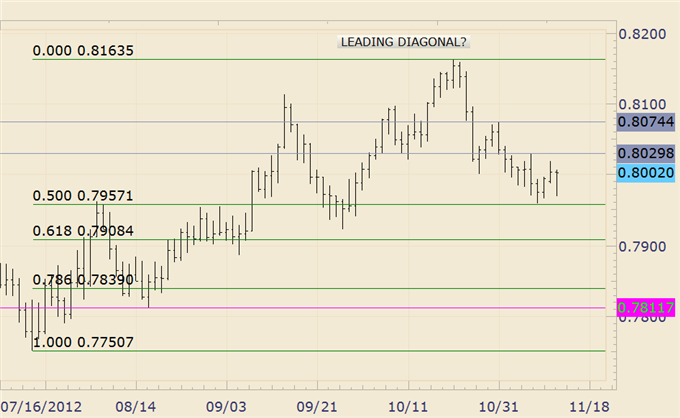 FOREX Technical Analysis Observations: It’s important to realize that the EURGBP rally from 7751 is probably a leading diagonal for several reasons. Leading diagonals are motive waves that occur as wave 1 or A but the subsequent 2nd or B wave often retraces a significant amount of the leading diagonal. Price has bounced from the 50% retracement.

FOREX Trading: Allowing for additional strength off of the 50% retracement, expect resistance at/between recent pivot highs of 8030 and 8074 before the next leg of weakness towards deeper retracements levels at 7908 and perhaps 7839. 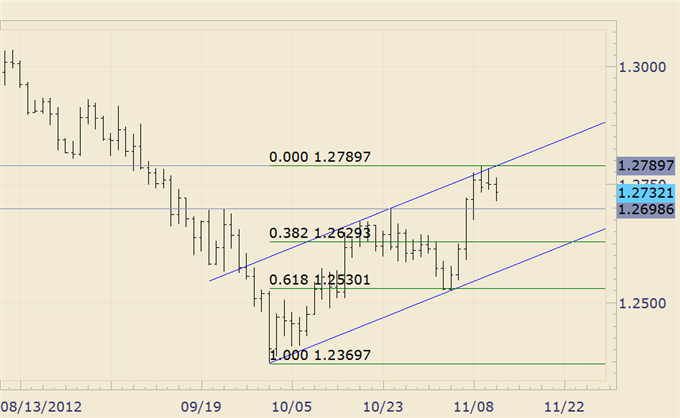 FOREX Technical Analysis Observations: The AUDNZD has reversed from corrective channel resistance and confirmed an inside day break to the downside (an inside day formed Monday and price broke lower today). The 3 wave structure of the rally from 12640 and corrective channeling is consistent with a resumption of longer term weakness.

FOREX Trading: Look lower but beware of former resistance at 12699. This level is likely just interim support however. The ultimate test likely doesn’t come until the 38.2% retracement at 12629 and/or channel support. Channel support intersects with the 38.2% level at the end of November. 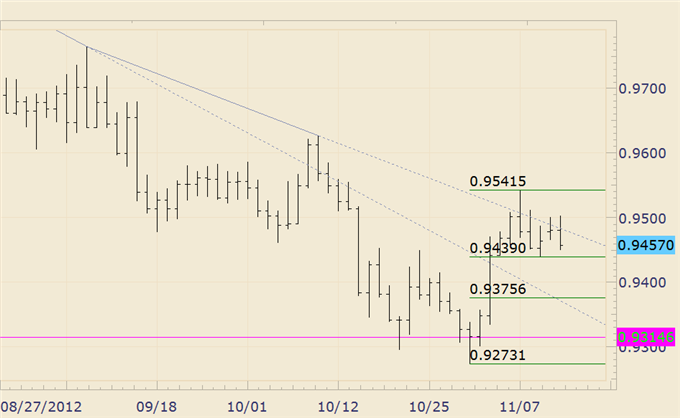 FOREX Technical Analysis Observations: 2 weeks ago the CADCHF made a weekly JS Spike (emotional bottom). The rally from 9273 is clearly impulsive and the low for November is on the first day of the month.

FOREX Trading: Conditions warrant a bullish stance on dips. The first support area, defined by the 38.2% retracement and 10/24 high, has already been tested and held. However, the decline from 9542 is either a 2nd or B wave, which is usually deeper than 38.2%. As such, be on the lookout for a low closet to the 61.8% level at 9376.

To be added to Jamie’s e-mail distribution list, please