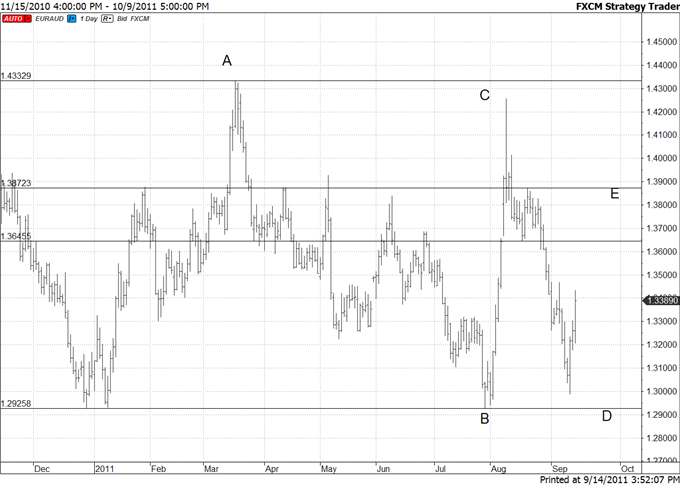 The EURAUD has traded in a 1400 pip range since January with the latest advance (from the July low) and decline (from the August high) stopping just short of the respective range extremes. This slight tightening of the range hints that a triangle may be underway. If so, then price will work higher over the next few weeks in order to complete wave E of the triangle before reversing lower. 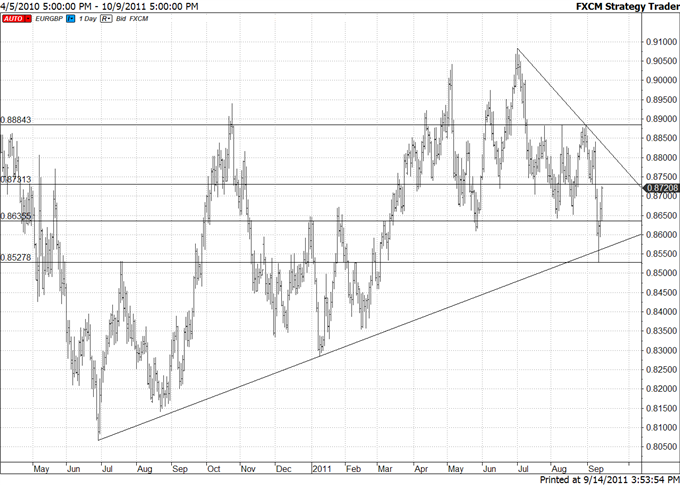 The EURGBP plummeted into support from a trendline on Monday and is nearing resistance from former support at 8731. The rally is stretched and a move back to the 8640 pivot is in order but a dip to there would present a long opportunity against Monday’s low. 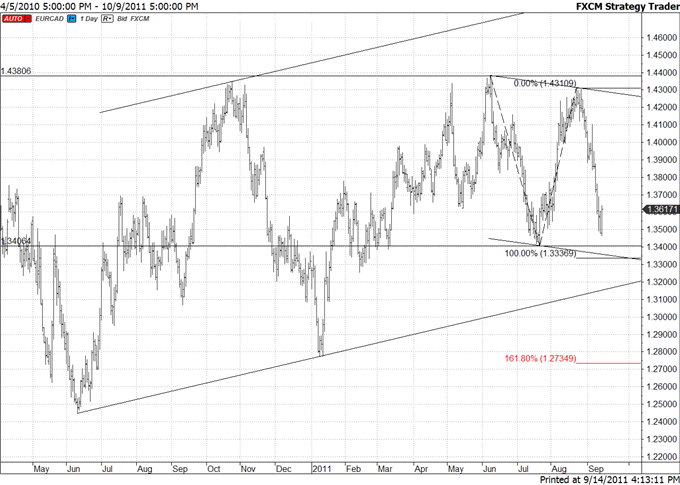 Swings since May have been confined to a 900 pip range. Near term, a drop below 13406 may actually complete a 3 wave correction from the June high. The decline would consist of 2 equal legs at 13337 and corrective channel support is at 13355 today (Wednesday the 14th). 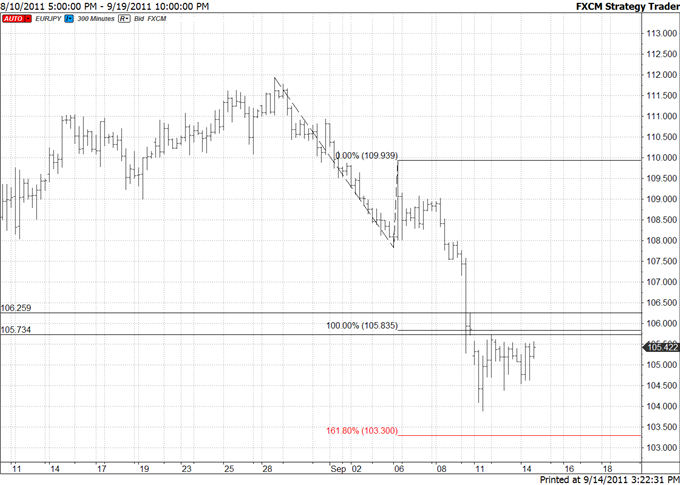 The EURJPY has broken down to trade at its lowest level since June 2001. Price has consolidated the last few days, making inside days with Monday’s range. Price could see a near term pop, but 10625 is resistance. It is also possible that a triangle is underway from the low. Short term structure favors at least one more low in order to complete 5 waves down from the 8/29 high. 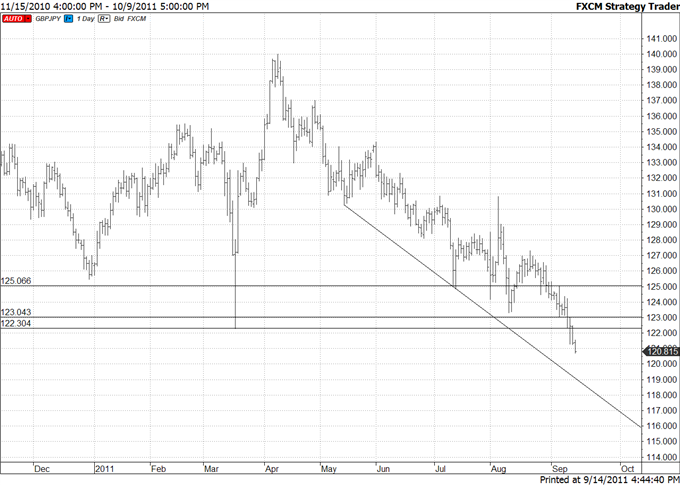 The GBPJPY has dropped to its lowest level since January 2009 and a test of that month’s low at 11880 and perhaps a break to lower levels must be considered. An RSI of 23 on the daily warns of pullbacks, which should encounter resistance at recent supports of 12235 and 12305. A larger bearish bias is valid against the September 1 high of 12534 with objectives at the mentioned 11880 and downward sloping support line. 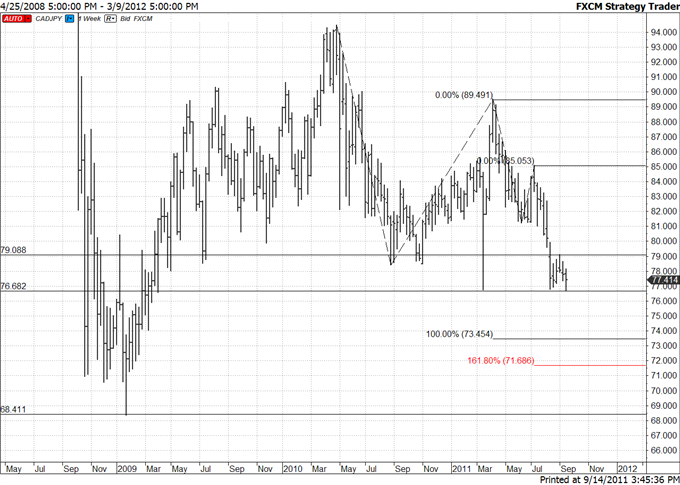 The CADJPY traded slightly below its August low on Monday before reversing. As is the case with ‘risk trends’ in general, there is no compelling evidence to suggest that this is the bottom so favor the downside against the September 1 high of 7911. Measured objectives are 7345 and 7169. 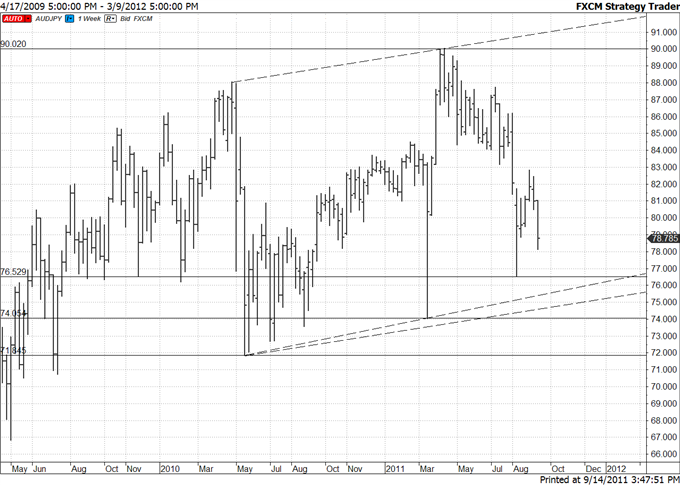 AUDJPY is nearing the August low and a drop below would encounter support from the trendline that extends off of the 2010 and 2011 lows. Near term, price appears extended to the downside which gives scope to a rally into resistance from 8015/50. A larger bearish bias is warranted against the September 1 high of 8282 in anticipation of a break below the August low.

Jamie Saettele publishes Daily Technicals every weekday morning, COT analysis (published Monday), technical analysis of currency crosseson Wednesday and Friday (Euro and Yen crosses), and intraday trading strategy as market action dictates at the DailyFX Forex Stream. A graduate of Bucknell University, he holds the Chartered Market Technician (CMT) designation from the Market Technician Association. He is the author of Sentiment in the Forex Market. Send requests to receive his reports via email to jsaettele@dailyfx.com.