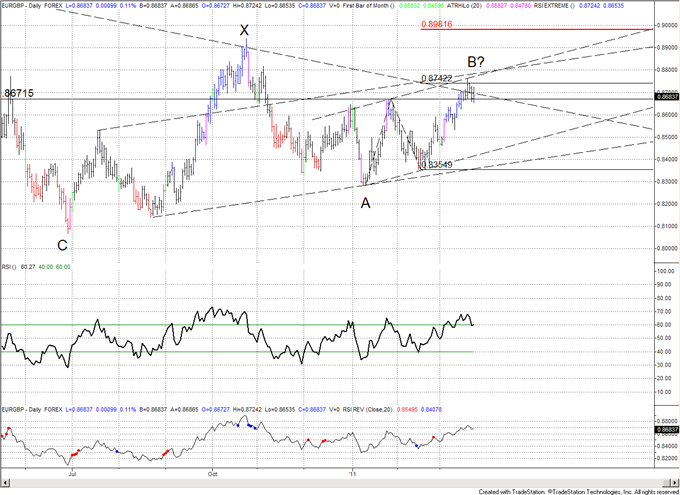 A head and shoulders continuation pattern appears to be unfolding from the June 2010 low. 8742 is a measured objective (100% extension of eurcthe rally from 8284-8672) has been reached as have several resistance lines, including a long term trendline (since 2008) and the upward sloping parallel corrective line that extends off of 8672. A slight new high cannot be ruled out but risk has now shifted to the downside. 8800 is resistance. A drop under 8532 confirms a reversal. 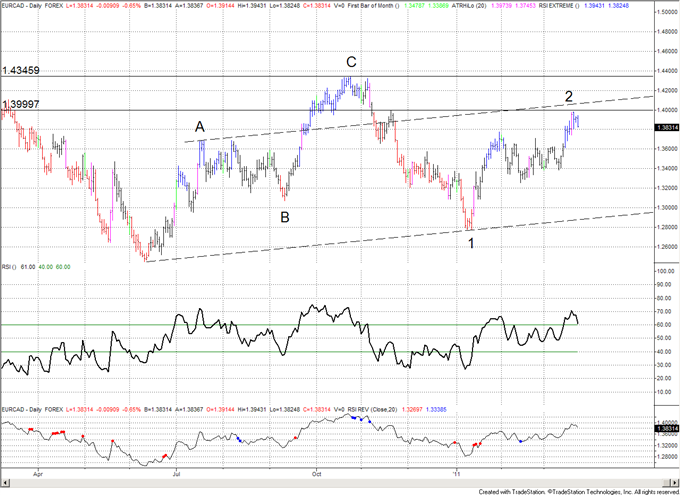 Like the EURGBP, the EURCAD from the June low takes the shape of a head and shoulders continuation pattern. I continue to watch the line parallel to the neckline for resistance (just above 14000), which was just missed on Monday. What’s more, last Friday’s rally was a ‘large range’ bar which indicates a panic move. Such days can be used as points of reference. A daily close under the Friday low of 13745 would increase the probability that a top of increased importance is in place. 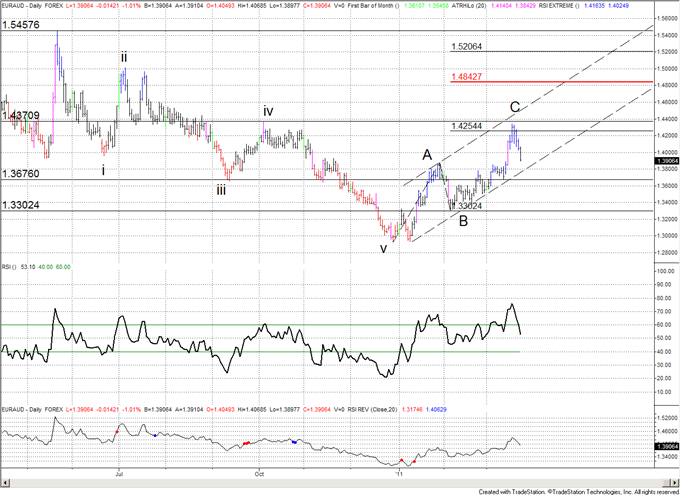 I wrote last week that “trading above the corrective channel would suggest that the rally is a 3rd wave and focus would shift to 14843 (161.8% extension).” Price reversed just short of the corrective channel line and right at the 100% extension of the rally from the low. Moves that divide into equal legs are hallmarks of corrections thus the EURAUD advance may be complete. This of course contradicts the idea that an important low is in place following an ending diagonal from the flash crash high last May. 13676 serves as the pivot (bullish above and bearish below). 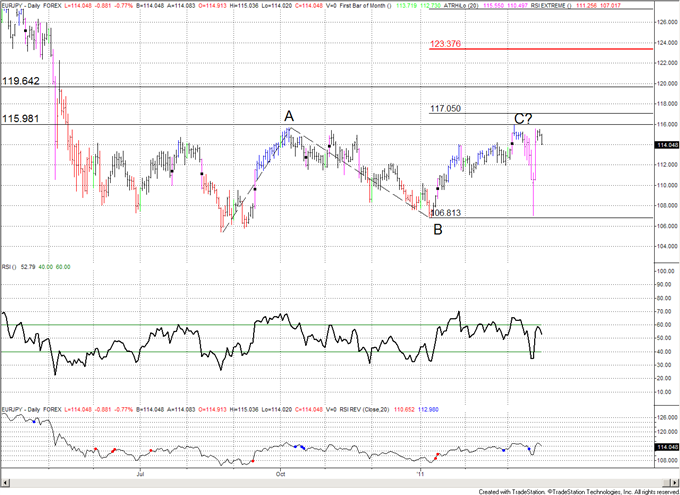 On a net basis, the EURJPY is relatively unchanged since late February. Tell that to anyone that has been in the market since then and they’ll slap you silly. Quite simply, the EURJPY is in a range between 107 and 11500 (and has been since mid 2010). I am cautiously bearish with price near the upper end of its range now. 11200 and 11070 are supports. 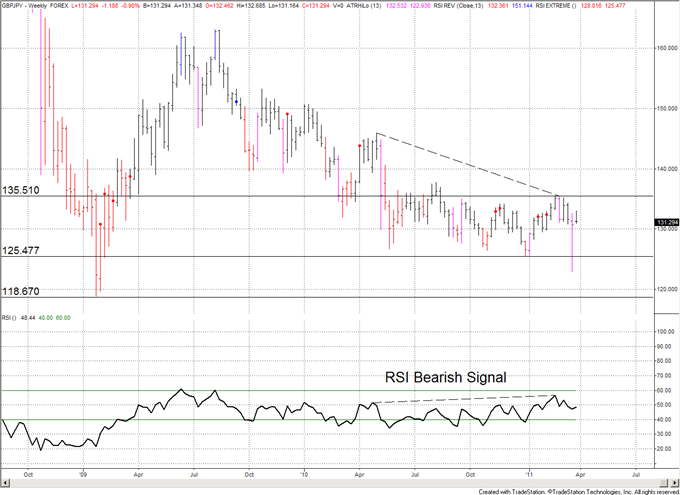 What applies to the EURJPY applies here as well. That is, price is unchanged on a net basis since February. Last week’s panic decline resulted in the GBPJPY trading at its lowest level since January 2009 (briefly) before the snap back to current levels. Still, the downside remains favored especially with the failure in the mid 13000’s in February. RSI is giving off a bearish signal on the weekly as well (higher RSI and lower price). Supports come in at 13050, 12950, and 12800. 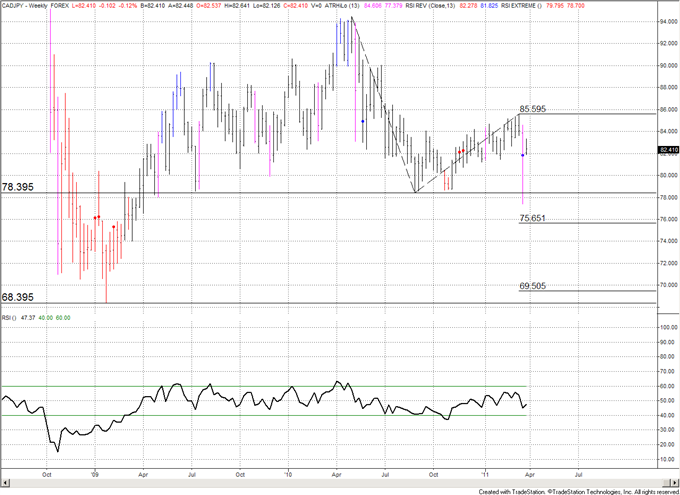 The CADJPY took out its prior 8 months of gains in a matter of minutes last Wednesday before snapping back to trade back into the 80s. The structure of the rally from the 2009 low (6840) is clearly corrective and should therefore be entirely retraced. Near term, I favor at least a partial retracement of the rally from 7738. Support comes in at 8050-8100. 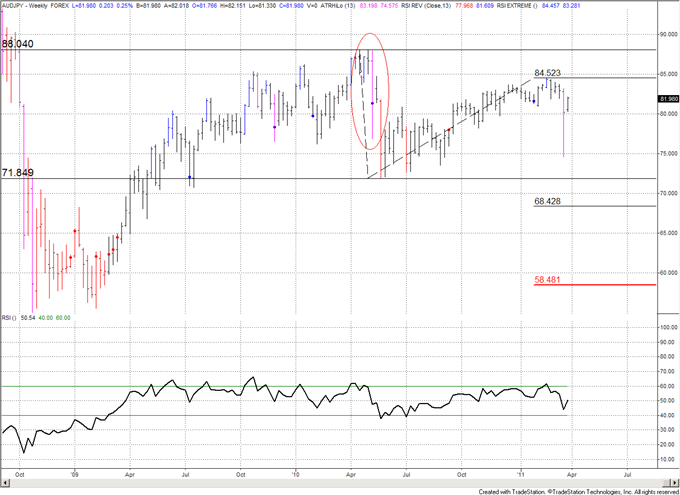 The choppy rally from the 2010 low was nearly entirely retraced last Wednesday but the AUDJPY is right back at former support near 8200. This area is now resistance so I’m looking lower from here. Support comes in at 8015, 7925, and 7815.