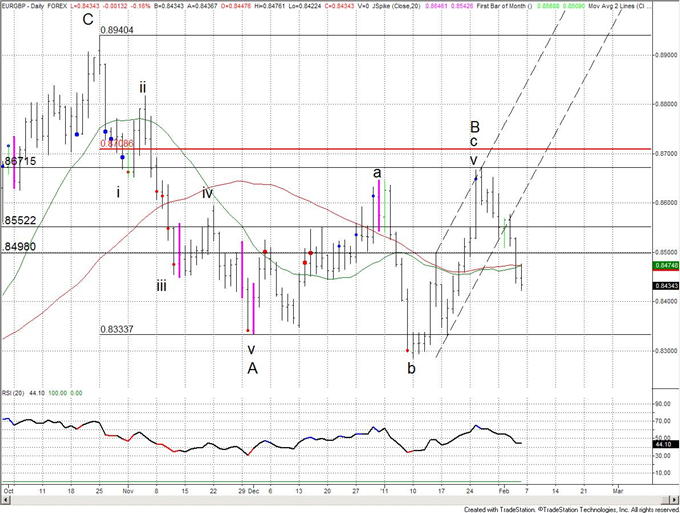 *on the charts below, magenta bars/candles indicate key reversals from 20 day high/low and a range for the bar that is at least as large as 20 day ATR (weekly parameter is 13 and monthly parameter is 12)

I wrote Wednesday that “price has closed (daily) below the Elliott channel thus the probability that a top is in place at 8672 is increased. Moreover, the drop from 8672 has the look of an impulse (5 waves).” The EURGBP has plunged and closed below both its 20 and 50 day averages. Longer term expectations are for a drop below 8066 and possibly a test of the downward sloping line drawn off of the June 2009 and June 2010 lows (maybe we’ll get there in June 2011-the line in June 2011 is at about 7730). There will be rallies along the way of course and when these advances unfold, I’ll attempt to identify their terminal points in real time. For now, 8400 and 8340 are short term supports with 8477 and 8509 serving as resistance. 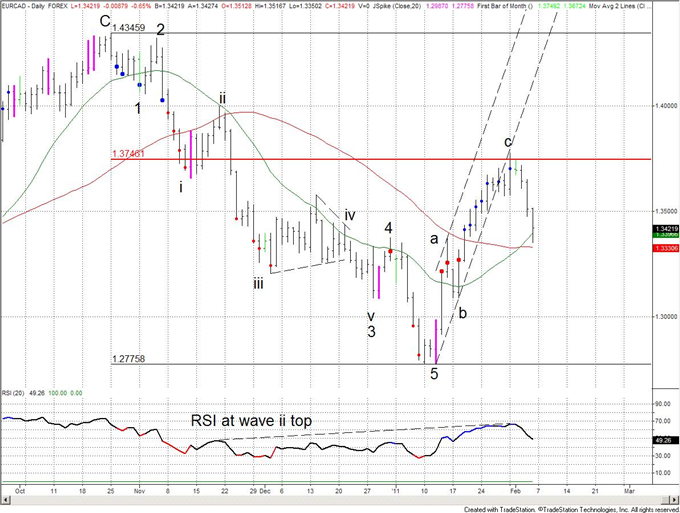 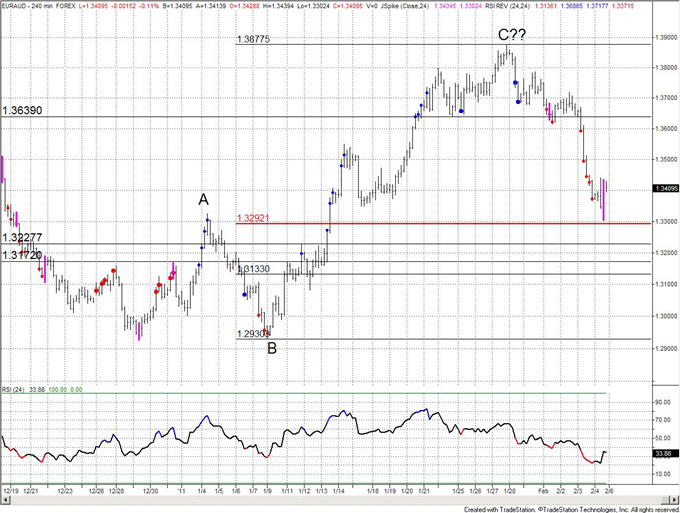 Recent commentary has focused on the rally from 12930 as an impulse and expectations for a drop to 13300 before strength resumes. Based on the other Euro crosses, I am not so sure that the decline from 13878 is corrective. An alternative is proposed above. My daily RSI signals remain bearish as well. Supports are at 13172 and 13228 and resistance is from 13473 to 13513. Next week should provide clarification. 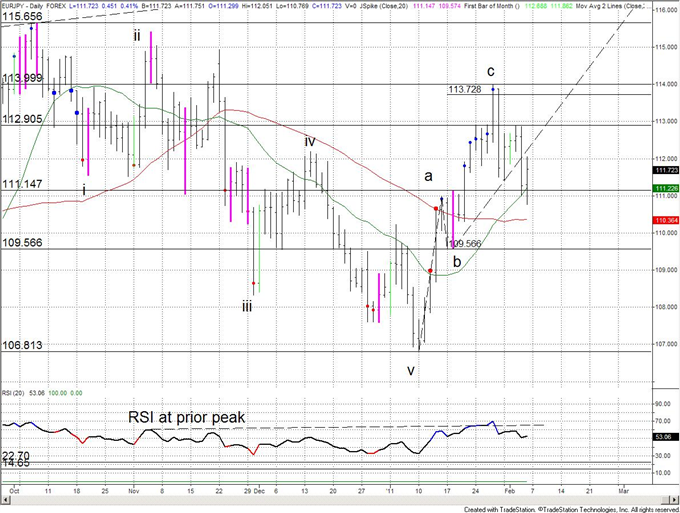 The EURJPY decline has reached initial support (former resistance at 11115). To review, the rally from 10681 consists of 2 equal legs, which is common for corrective moves. Also, the 3 wave rally from 10538 bolsters the bearish pattern as does the RSI bearish signal (higher RSI and lower price peak). If the larger trend is indeed still down, then price should remain below 11291. The next level of interest on the downside is 10957. 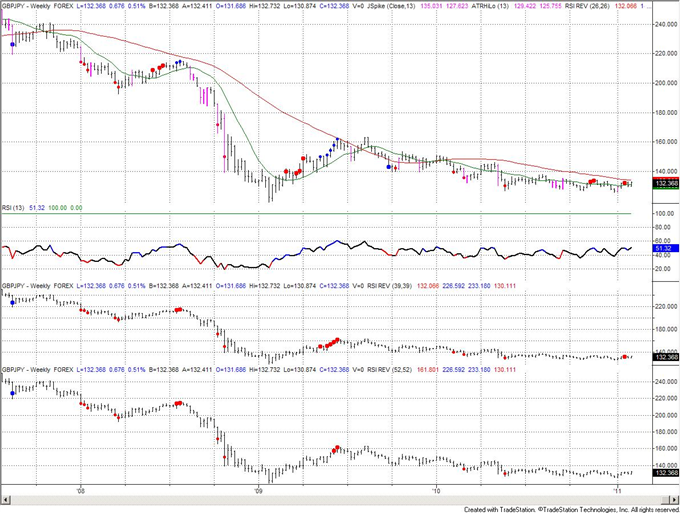 The GBPJPY continues to trade within a range. Pivot highs since July are 13417 and 13753. As mentioned previously, it would take a move above 13752 in order to suggest that the larger trend has turned up. Weekly RSI signals remain bearish. Until broken, I favor the larger downtrend, especially with price at the upper end of its range. 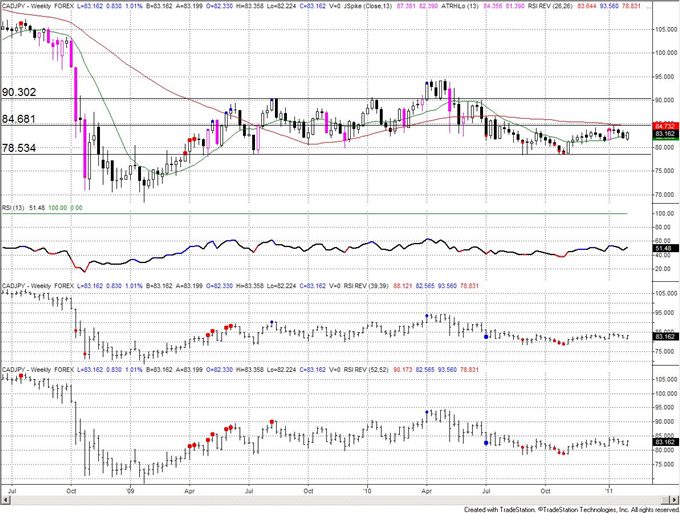 The CADJPY has traded between basically 8100 and 8450 for the past few months. Strength was contained by the 52 week average in January and the 13 week average has held as support since late November. Even a rally above 8468 could prove terminal as one can see potential for a large head and shoulders continuation pattern forming since the 2009 low. 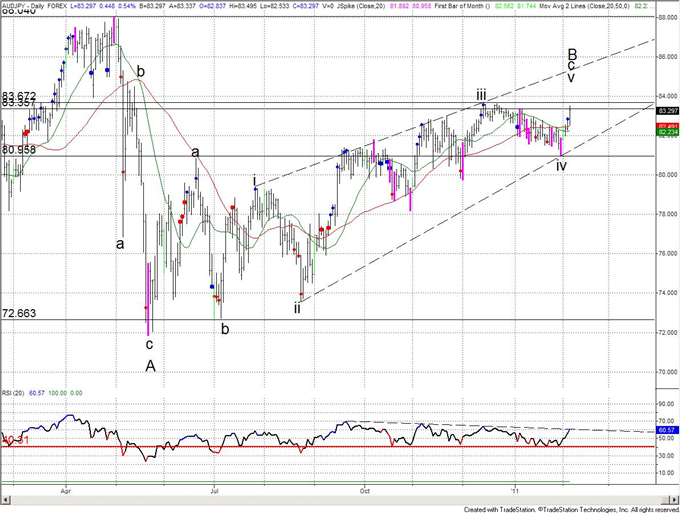 The AUDJPY took out its last 4 weeks’ highs this week. Making a fresh 2011 high today favors additional strength, perhaps towards 8500. The resistance level I’ll be watching in the event of continued strength is the upward sloping trendline. Daily and weekly RSI signals remain bullish.