US equity market are on the backfoot with the S&P 500 dropping 1.4% to break below its 50DMA (2859) for the first time since January 22-23 as tensions continue to rise between the US and China over trade. Latest reports from Chinese press signaled that there is zero chance that a trade deal will be announced tomorrow, in light of expectations that the Trump administration will raise tariffs to 25% on $200bln worth of Chinese goods, thus raising doubts as to whether negotiations will continue as China look to retaliate.

Following the increased risk aversion, this had briefly pushed the US 3-Month/10yr spread to inversion for the first time since March. However, panicking that a recession is near would be misplaced for the time being (full story). This has also coincided at a time where the VIX futures curve has also inverted, which has previously preceded a sell-off in equity markets (full story)

US/China Trade War: What Next?

Tomorrow at 00:01 tariffs are set to be hiked to 25%, however, this may not be a deal breaker. It is well documented that President Trump pays very close attention to the stock market and uses that as a barometer of how well the US economy is performing, as such, a deal is still the base case, albeit a with little less certainty as of late. But the question you have to ask is would Trump risk a stock market sell-off during an election campaign. In turn, there is a political benefit for both the US and China to eventually reach a deal.

A trade agreement is unlikely to be announced tomorrow, what is perhaps is more likely is that the Trump administration raises tariffs on products exported from China but not those already in transit. According to the FT, this would allow for a 2-4-week window to reach a deal before the full tariff effects take place, thus there is a possibility that the US and Chinese officials agree to carry on negotiations in order to eventually reach a deal, which in turn could provide some relief for equity markets. However, a break down in talks is likely to exacerbate the selling. 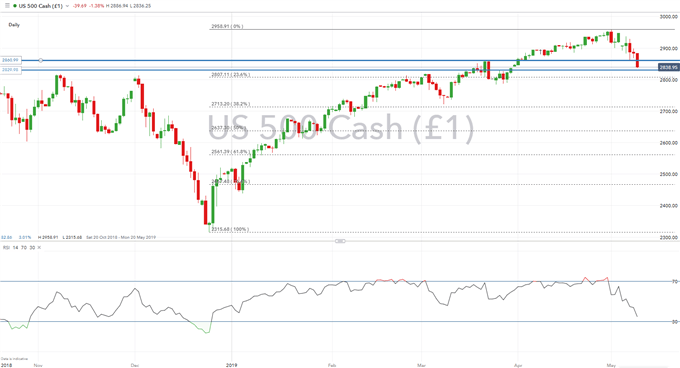