- USD/JPY approaching the big 100 level again, retrace might be compelling for Yen bulls

The USD/JPY is approaching the 100 level following yesterday’s central bank bonanza which saw the BOJ shift focus to yield curve control, while the Fed signaled a potential December move on rates, but reduced the longer term outlook.

“Second-tier” US Data is on tap today, with housing data in focus for potential short term price swings.

US Housing data is also on the docket. Existing Home Sales is expected to show a rise of 1.1% in August versus a -3.2% prior figure.

Indeed, market reaction to the central banks announcements seemed to have been one of skepticism. The Fed signaled a potential move in December with 3 voting members opting for a hike, but reduced the longer term rates path and economic outlook, which appears to have put the US Dollar under pressure in the short term.

With the Fed’s actions generally in line with expectations, the recent downside pressure might have more to do with the markets showing increasing conviction on a BOJ that is running out of ammo, as the central bank opted to tinker with its easing program to focus on controlling the yield curve in an effort to reduce pressure on bank’s margins following the BOJ’s NIRP.

With that said, the Yen is still expected to be the most volatile currency versus the US Dollar.

In turn, this may imply that the break out type trades are preferable in the short term time frames. 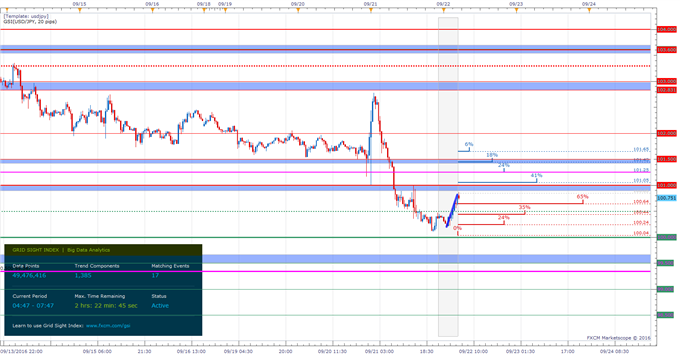 The USD/JPY is trading near potential resistance at 101.00, with GSI calculating higher percentages of past movement to the downside in the short term from current levels.

Meanwhile, the DailyFX Speculative Sentiment Index (SSI) is showing that about 82.7% of traders are long the USD/JPY at the time of writing, indicating an extreme reading, usually implying a short bias on a contrarian basis.