- Dairy Auction figures next for the pair, but all eyes are on central banks this week

- “Risk on” sentiment keeping the Kiwi bid for now

The NZD/USD has bounced off support around 0.7250, which also coincides with a key trend line, and the pair is currently testing its July high on positive risk sentiment since the start of the trading week.

The Dairy Auction numbers are the next event risk for the pair, but all eyes are on the Fed and BOJ this week, overshadowing the fact that the RBNZ are also on tap.

The New Zealand Dairy Auction is due to hit the wires around the start of US trading hours. The auction is set to start at 12:00 GMT, but official timing of the release varies, which might imply that traders should proceed with caution at those hours.

The last auctions saw the average price rise by 7.7% to $2,920. The dairy industry is New Zealand's biggest export earner, accounting for more than 29% of the country's exports, making this an important indicator to watch as rising dairy prices could potentially limit the scope of the RBNZ to further cut rates on higher inflation prospects.

The New Zealand Dollar has found a strong bid, even though the RBNZ cut rates, as the global hunt for yield continued and the relative yield for New Zealand assets remains the highest in G10.

A certain shift took place in the market and the currency's yield appeal started to ease somewhat after the ECB opted for inaction, and bets rose that the BOJ might shift its policy to try and push longer term yields higher– potentially inducing a bond market rout.

In turn, global yields saw a leg higher and stocks sold off on fears that central banks are running out of ammo.

This might have led to the Kiwi’s decline before finding support again around 0.7250.

The unfolding situation puts the BOJ and the Fed monetary policy decisions clearly in focus, potentially implying that the RBNZ decision may only slightly add or deter from momentum following the earlier and more significant policy announcements.

A “hawkish hold” by the Fed and/or a BOJ that misses expectations seem likely to bode ill for risk trends, potentially implying that the Kiwi will be at the mercy of yields and risk trends.

Interestingly, the market started the trading week on a positive risk mood, possibly reflecting moderation in the “hawkish Fed” narrative.

We use volatility measures as a way to better fit our strategy to market conditions. The New Zealand Dollar is seeing a pickup in volatility recently, based on 14-day ATR readings, and the event risk ahead seem likely to see significant moves. 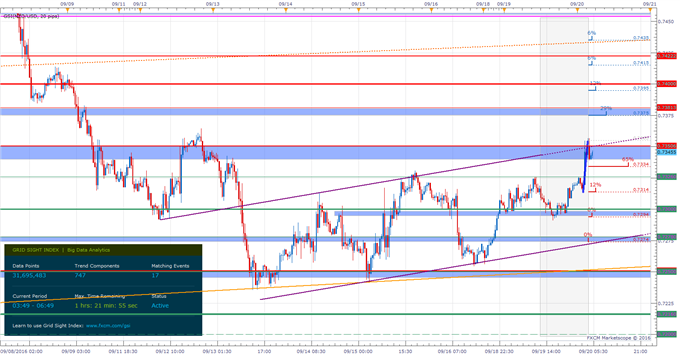 The NZD/USD is trading around potential resistance at 0.7350, with GSI calculating higher percentages of past movement to the downside in the short term from current levels.

Meanwhile, the DailyFX Speculative Sentiment Index (SSI) is showing that about 40.8% of traders are long the NZD/USD at the time of writing, after trades cut shorts rapidly on the latest Kiwi decline.