- AUD/USD bounced off important support at 0.7450 and key trend line

- RBA Meeting Minutes next for the pair, but eyes on Fed and BOJ

The AUD/USD has bounced off a key support level around 0.7450, which also coincides with a key trend line, and the pair reclaimed the 0.75 handle on positive risk sentiment to start the trading week.

The RBA Meeting Minutes is the main event risk in the short term for the pair, but all eyes are on the Fed and BOJ this week.

The RBA September Meeting Minutes are set to hit the wires 01:30 GMT.

In their latest rate decision, the RBA opted for status que, keeping the benchmark interest rate unchanged at 1.5%.

In turn, we suggested any knee-jerk weakness might be seen as a buying opportunity by Aussie bulls, which indeed proved to be the case, until a certain shift took place in the market, and the currency's yield appeal started to ease somewhat after the ECB opted for inaction, and speculation rose that the BOJ might shift its policy to try and push longer term yields higher– potentially inducing a bond market rout.

As a consequence, global yields saw a leg higher and stocks sold off on fears that central banks are running out of ammo.

In comes the other event risk on the docket; the Fed and BOJ monetary policy decisions.

A “hawkish hold” by the Fed and/or a BOJ that misses expectations seem likely to bode ill for risk trends, potentially implying that the RBA minutes might prove to be a “nonevent” this time around, as the market trades in anticipation for Wednesday.

Interestingly, the market started the trading week on a positive risk mood, possibly reflecting moderation in the “hawkish Fed” narrative, which seems to have given the sentiment linked Aussie a boost.

We use volatility measures as a way to better fit our strategy to market conditions. The Australian Dollar is expected to be more volatile than most other majors versus the US Dollar, based on a 1-week implied volatility measures (Yen more), potentially implying that the market is looking at the Aussie as a likely candidate for more volatile moves on the aforementioned event risk.

Realized volatility as well has seen a pick up recently based on 20-day ATR readings. 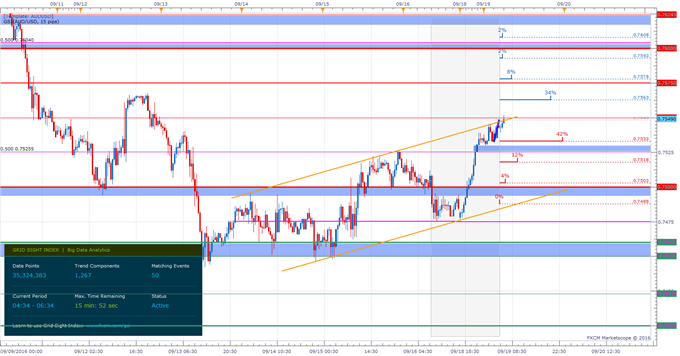 The AUD/USD is trading around potential resistance at 0.7550, with GSI calculating higher percentages of past movement to the downside in the short term from current levels.

Meanwhile, the DailyFX Speculative Sentiment Index (SSI) is showing that about 54.1% of traders are long the AUD/USD at the time of writing, implying a short bias on a contrarian basis.