- EUR/USD Sellers took advantage of higher prices after the ECB, but 1.12 holds at the moment

- Draghi comments might be indicative of potential changes to QE strategy

The EUR/USD is nudging lower, in apparent indecision, after the pair found support above the 1.12 figure following the ECB policy decision, which saw the pair reject from the 1.13 handle.

ECB President Mario Draghi hinted at a potential change to QE implementation, but participants seemed to have waited for something clearer for any real conviction.

The Euro-Zone ZEW Survey is in focus today for the pair, and could shed light on developments in the Euro-Zone following the Brexit vote.

The September ZEW Survey is in focus today for the pair, and could help shed light on the economic environment following the Brexit vote.

The initial reaction following the vote saw a plunge in the survey on Brexit related uncertainty, presumably against the backdrop of worries on export prospects and the stability of the European banking and financial system.

With that said, the latest survey saw a boost to confidence as worries eased somewhat in the short term, both in the Euro-Zone and the UK– and the survey is expected to indicate an increase today as well.

Data in the Euro-Zone has deteriorated compared to consensus forecasts (according to Citi Surprise Index), implying a potential miss in today’s numbers.

With that said, the ZEW numbers seem to have relatively reduced impact on the Euro lately, implying that a significant miss might be required to shake the pair.

ECB President Mario Draghi hinted at a potential change to QE implementation, but participants seemed to have waited for something clearer.

Indices did recover sharply, but if a similar pattern emerges, currencies such as the US Dollar, Yen and Euro could remain supported, potentially implying range bound trading conditions for the pair.

In turn, this might suggest that range bound trading plays may be appropriate ahead. 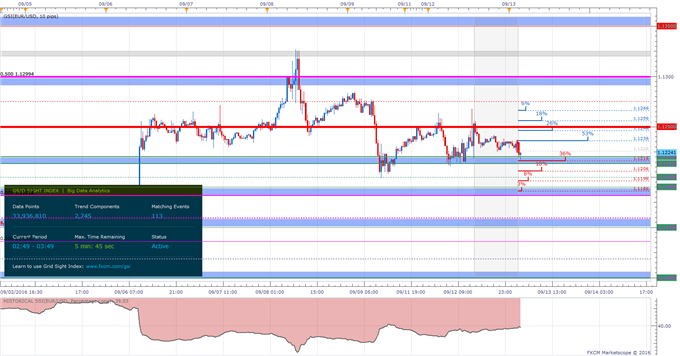 The EUR/USD is trading above potential support at 1.1220, with GSI calculating higher percentages of past movement to the upside in the short term.

Meanwhile, the DailyFX Speculative Sentiment Index (SSI) is showing that about 39.5% of traders are long the EUR/USD at the time of writing, offering a long bias on a contrarian basis.