AUD/USD Continues To Tumble as Stocks Sell Off Worldwide

- AUD/USD sell-off continues after reversing at 0.77

- Bonds are plummeting worldwide (yields higher), alongside a sell-off in global equities, correlation highest since 2008

The Australian Dollar is tumbling versus other major currencies after Friday saw a global bond and stock sell-off, which carried through to start the trading week.

The AUD/USD reversed off the 0.77 handle last week as a sign of things to come, and it seems the sentiment sensitive currency has suffered most since.

Aussie has strengthened against the backdrop of central bank support worldwide pushing yields lower, as the currency still held an attractive relative yield.

Recent movements worldwide might suggest that the market was in a somewhat “complacent mode”, with yields expectations at rock bottom.

Fed’s Brainard is in focus today and could add fuel to fire if Fed hike speculation gets pushed forward.

Fed-speak is in focus today, with Lockhart, Kashkari and Brainard set to give speeches.

Perhaps above all, the market will want to hear what Brainard has to say, as she might just be the most dovish voting policymaker.

The other two member’s hawkish view has been quite telegraphed as of late, so it would seem that if Brainard sets a similar tone the US Dollar could rise.

We have mentioned for quite a while that the Aussie could remain supported in a record low yield and low volatility environment, suspecting that the market could go on a “rate cut rally” ahead of the RBA rate cut decision, as the currency still held one of the more attractive yields.

With that said, the tide seemed to have shifted in the last couple of trading days, after the ECB opted for inaction, and speculation that the BOJ might shift its policy to try and push longer term yields higher – potentially inducing a bond market rout.

Indeed, concerns of the risks of extremely easy monetary policy for too long started to creep in lately, and alongside a rise in Fed rate hike speculation, risk assets seemed poised for some pressure, perhaps caught in a “complacent state” with extremely low volatility.

All the above bodes ill for the sentiment linked Australian Dollar, as stocks and bonds correlation currently sits at the highest level since 2008. The fact that the Aussie has been rallying recently may have added a “liquidity fuel" to the fire as well, with longs running for cover.

We use volatility measures as a way to better fit our strategy to market conditions. The Australian Dollar is expected to be more volatile than other majors versus its US counterpart based on 1-week and 1-month implied volatility measures. 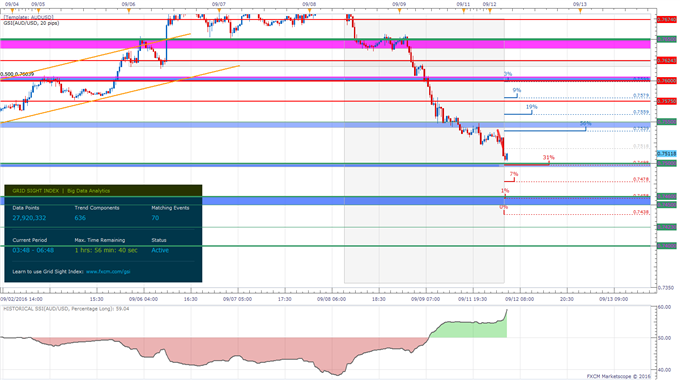 The AUD/USD is trading near potential support at 0.75, with GSI calculating higher percentages of past movement to the upside in the short term.

Meanwhile, the DailyFX Speculative Sentiment Index (SSI) is showing that about 59.0% of traders are long the AUD/USD at the time of writing after flipping long on the drop, apparently trying to pick a bottom, offering a short bias on a contrarian basis.