- Fed-Speak is in focus ahead for the pair, as the market eagerly awaits September 21

The USD/JPY is nudging lower after the pair found resistance around 102.50, implying that further momentum to the upside might require a fundamental catalyst for a push higher.

This makes the next round of Fed-Speak interesting to watch for potential shifts in interest rates expectations as the market eagerly awaits what might be an explosive day September 21 with both the Fed and BOJ policy decision.

Fed-Speak takes center stage in the hours ahead as Boston and Dallas Fed Presidents Eric Rosengren and Robert Kaplan are due to give speeches.

Following a round of weak data including worse than expected NFPs and ISM numbers, Fed rate hike expectations have deteriorated lately, but slightly picked up yesterday for 18% in September and 51.4% in December (according to Fed Fund futures). Conveniently, exactly when the US Dollar hit support.

Participants will look to see if there is more aggressive talk of potential hikes before the two-week blackout period ahead of this month’s FOMC meeting.

A hawkish lean might help see the US Dollar edge higher as the market eagerly awaits what might be an explosive day September 21 with both the Fed and BOJ policy decision.

Indeed, the BOJ decision will be in huge focus as the bank wrestles with perceived lack of firepower to stimulate the economy.

In this context, looking at Japanese Government Bonds behavior has proved telling. The last spike in yields, apparently against the backdrop of traders betting against the effectiveness of BOJ actions, initially saw only a limited response by the pair before plunging lower.

We use volatility measures as a way to better fit our strategy to market conditions. The Yen is expected to be the most volatile currency versus the US Dollar based on 1-week and 1-month implied volatilities, but ATR measures suggest a reduced level of volatility as of late.

In turn, this could imply that key tech levels could hold in the short term, but things seems likely to pick up ahead. 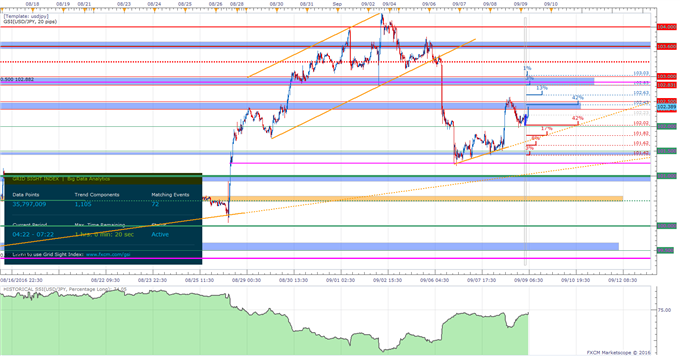 The USD/JPY is trading at a potential resistance area below 102.50, with GSI calculating even percentage of past movements to either side in the short term.

Meanwhile, the DailyFX Speculative Sentiment Index (SSI) is showing that about 74.0% of traders are long the USD/JPY at the time of writing, offering a short bias on a contrarian basis.