NZD/USD Levels to Know Ahead of Dairy Auction, US Services ISM

The NZD/USD is trading higher, currently above the July high at 0.73247, but the pair failed to print a daily close above the level for the last seven attempts.

The combination of key technical levels, and important event risk could prove interesting as the Global Dairy Auction and US Services ISM are set to hit the wires.

The New Zealand Dairy Auction numbers are due to hit the wires around the start of US trading hours. The auction is set to start at 12:00 GMT, but official timing of the release varies, which might imply that traders should proceed with caution at those hours.

The last auctions saw the average price rise by 12.7% to $2,731. The dairy industry is New Zealand's biggest export earner, accounting for more than 29% of the country's exports, making this an important indicator to watch as rising dairy prices could potentially limit the scope of the RBNZ to further cut rates on higher inflation prospects.

The New Zealand Dollar has found a strong bid, even though the RBNZ cut rates, as the global hunt for yield continues and the relative yield for New Zealand assets remains the highest in G10.

Rising dairy prices could potentially hint at higher inflation, further limiting the scope of the central bank to cut rates against a backdrop of a housing prices boom. In turn, this might further highlight the appeal of the Kiwi.

Augusts’ ISM Non-Manufacturing Composite survey is on tap as well, set to be released 14:00 GMT.

US news-flow has deteriorated compared to consensus forecast in the last month-and-a-half (according to Citi Economic Surprise Index), potentially implying lower than expected reading in today’s numbers.

We use volatility measures as a way to better fit our strategy to market conditions. The Kiwi is seeing lower levels of volatility lately according to 20-day ATR measures, like the markets in general this past August.

With that said, if the data today points to Kiwi strength, a break-out above key resistance at the July high might open the floodgates for a pickup in momentum for breakout type plays. 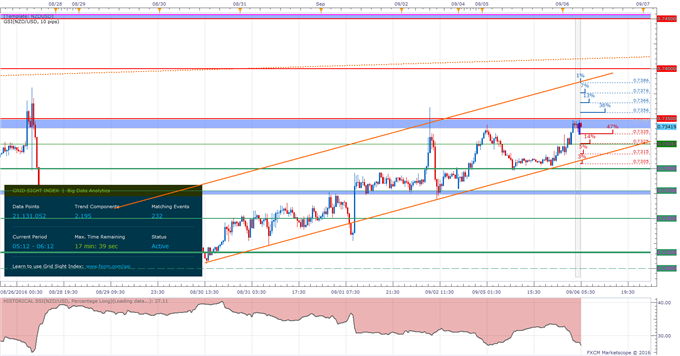 The NZD/USD is trading at a potential resistance area below 0.7350, with GSI calculating higher percentages of past movement to the downside in the short term.

Meanwhile, the DailyFX Speculative Sentiment Index (SSI) is showing that about 27.1% of traders are long the NZD/USD at the time of writing, offering a long bias on a contrarian basis.