- RBA Rate Decision the main event risk on the docket ahead

- Last time the RBA met the market went on a “rate cut rally”, a hold on rates is expected this time

The AUD/USD is trading higher, testing the 0.76 handle at the time of writing, picking up after the market reversed initial NFP US Dollar weakness as we suspected.

Longer term price action is displaying some bearish signs, but with the RBA rate decision on tap things could change quickly.

The Reserve Bank of Australia Rate Decision is set to hit the wires 04:30 GMT.

The RBA is expected to keep the benchmark interest rate unchanged at record low 1.5%, in what will be Governor Glenn Stevens’s final rate decision, after the bank cut rates two times in the past four months.

Last time the RBA acted, the market went on a “rate cut rally”, as we suspected, apparently on a search for yield basis in a record low rates environment.

With that said, the RBA seems likely to attempt to signal further potential easing down the line. Markets are pricing in a 40% probability of more easing by end 2016 at this point in time.

A surprise rate cut will almost certainly see the Aussie tumble, but if the “more likely” scenario of a slightly dovish hold takes place, the same pattern from the last decision might repeat itself, with any knee-jerk weakness seen as a buying opportunity by Aussie bulls.

2Q’16 GDP is also on tap this week for an expected solid 3.2% annual rise. The combination of a higher yield, potential limited scope to cut rates and solid growth might be enough to keep the Aussie bid in early September until further rises in Fed bets.

We use volatility measures as a way to better fit our strategy to market conditions. The Australian Dollar is expected to be more volatile than most majors versus its US counterpart based on 1-week and 1-month implied volatility measures (only Yen more).

With that said, volatility has been subdued lately with 20-day ATR measures sitting at the lowest levels this year, and the US is on holiday today.

In turn, this might suggest that the Aussie could remain quiet in the short term but pick up following the RBA for breakout type of plays. 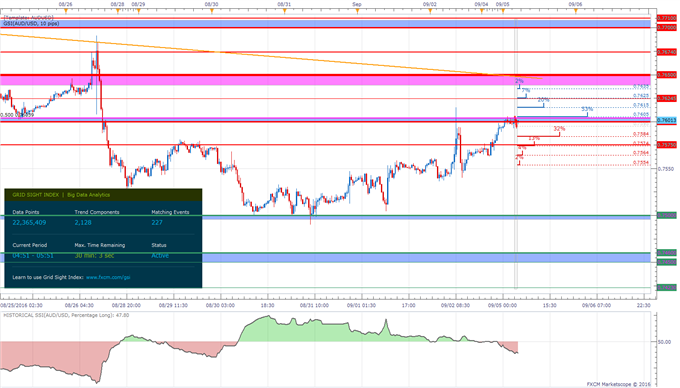 The AUD/USD is trading at potential resistance around 0.76, with GSI calculating higher percentages of past movement to the upside in the short term.

Meanwhile, the DailyFX Speculative Sentiment Index (SSI) is showing that about 47.8% of traders are long the AUD/USD at the time of writing after flipping short at the start of this week’s trading, offering a slight long bias on a contrarian basis.